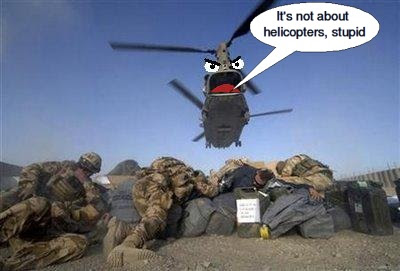 Twice we've called "time" on the controversy over equipment for our troops in Afghanistan, yet it continues almost unabated. It was with more than some interest, therefore, that we watched author and analyst Michael Griffin on BBC News 24 yesterday, expressing similar puzzlement over the intensity of the "debate".

Viewed wholly objectively, with the focus narrowed down to whether troops have enough helicopters, there is nothing to sustain it. As it stands, there is no shortage of helicopters in theatre to support current operations. The prime minister is right on this.

That most of the helicopters are American is neither here nor there. But there are Dutch, Canadian and British as well, all "pooled" in a vast coalition fleet which is being used not for British or American operations, but for coalition operations, of which the national contingents are an integral part.

In that sense, complaining about the shortfall of British helicopters is about as rational as anyone arguing against the use of B-17s of the US 8th Army Air Force to extend the strategic bombing campaign against Germany in 1943. Allies work together, and harness their collective assets to the common cause. That is what we did then and that is what we are doing now.

In seeking to explain the furore, however, Griffin linked the campaign in Afghanistan with Iraq, suggesting that in the latter, the British Army had not performed well, to the disappointment of the Americans. And in Helmand too, its grasp of counter-insurgency had been maladroit, again leading to a less than admiring response from the Americans.

To an extent, ventured Griffin, the military were seeking to transfer the blame for their own poor performance onto the politicians. Similarly, he felt, the military had some considerable control over the types of helicopters purchased and their deployment. Problems could not be laid entirely at the doors of the politicians.

If that is one element which is driving the controversy, the other is clearly the Conservative Party, anxious to find yet another stick with which to beat the government. The attitude is summed up in the recent comment from Liam Fox, who declares: "It is abundantly clear that we are asking our troops to fight a war for which Labour has not properly equipped them."

Notice there, the use not of the word "government" but of "Labour", revealing an overt partisanship which puts the alleged default wholly in a political context. There is no room in Fox's kitbag for any equivocation or shared responsibility.

Gordon Brown, nevertheless, is playing his own political games, relating helicopter requirements to current operations, but the distinction between these and the "general campaign" is becoming clear, with an acknowledgement that, while troops are able to fulfil their tasks at the moment, there is an overall shortfall of helicopters. This, we are told, is to be redressed by the Merlins which will at last be despatched by the end of the year, by the re-engined Lynxes and, next year, by additions to the Chinook fleet.

That things could have been done quicker, better and considerably more cheaply is indisputable, but the fact is that issues are being addressed, further confirming the "totemic status" of helicopters. In other words, this controversy isn't really about helicopters at all – or even about equipment.

Returning to Griffin, at the end of the interview – to the evident discomfort of his BBC interrogator – he broke away from the script to express his concern over the exaggerated level of publicity about an issue which lacked that substance. He warned that the Taleban would be monitoring programmes such as these, and the furore would improve their morale considerably.

Therein does lie a huge trap, created by the concern over casualties and the focus on helicopters. We have alluded to this before, in that if the Taleban were successfully to bring down a Chinook laden with troops, it is very hard to see how continuing the campaign could be politically sustainable.

The problem is that the Taleban know that, and they will do everything possible to make it so, while seeking generally to maximise the British casualty rate. This much is being recognised, with Dannatt at last taking the IED threat seriously.

As to the remarkable controversy that we have been witnessing for the best part of three weeks, this – if Griffin is right – is a dangerous self-indulgence which we simply cannot afford, motivating the Taleban to greater efforts on the basis that the home front can be so weakened that British troops will have to be withdrawn. We are, unwittingly, sending them a message that there is everything to gain from killing British troops.

This is not a happy message, and one that is difficult to change, as these media storms tend to have a life of their own. But the military, the politicians and the media – and indeed this blog – need to think very hard about the message they are sending, and to whom.