Snout in the trough 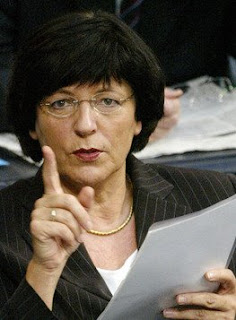 Through the MPs' expenses scandal, one occasionally heard noises off from our European "partners" who seemed to be amazed that there should be so much public outrage about what is, in other climes, perfectly normal behaviour.

Now, it seems, the Germans are having their own version. Social Democrat Health Minister Ulla Schmidt has raised a storm of protest after it emerged that she had flown out to Spain on holiday while instructing her official chauffeur to drive her ministerial limousine down from Germany to meet her at her holiday destination.

After the 3,000-mile trip in the official Mercedes, the chauffeur was kept on duty for two weeks, at the beck and call of his minister, being paid handsomely as overtime, while he shuttled her to and from the beach.

Embarrassingly, the chauffeur never got to do the 3,000-mile return trip as enterprising Spanish thieves nicked the motor, thus leading to the revelations in the press about the minister's little arrangement.

Interestingly, the minister was perfectly within the rules to use her official car for this purpose – so we have another "I was only obeying the rules" scenario, which went down so well in the UK.

The revelations have come at a particularly unhappy time for Frau Schmidt, now dubbed "S-Class Ulla" after the Mercedes model that disappeared. With a general election in the offing, the Social Democrats are positioning themselves as the party best equipped to lead the country out of the economic and financial crisis.

In her defence, I suppose, Frau Schmidt could claim that she was creating employment – not least for Spanish car thieves – and no one could complain that these were ruinously expensive "green jobs" so beloved of our ruling classes.