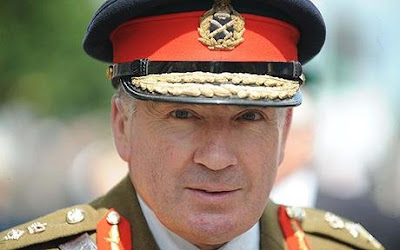 Those of you who have followed this blog from way back and many others, will know that in June 2006 and in the months thereafter, we harnessed the resources of the blog, and much else, to the campaign to get better protected vehicles for the British Army, in Iraq and Afghanistan.

Those of you who know a little about this author know that I am a parliamentary researcher. I work for people in (relatively) high places. That means I get information ... lots of it, and we also get a lot of people in high places, very high places, giving us very high quality information.

Bear with me on this. Unlike some, with tiny nuggets of information who rush into print, we hold our counsel. What you see is most definitely not all we get. We know things ...

Amongst those things we know, are that, when the campaign for protected vehicles was at its height and there was huge resistance to better vehicles, it was the ARMY that was briefing against them. Ministers, contrary to popular opinion, do not like getting soldiers killed – they wanted the machines.

And behind the ARMY briefing was General Sir Richard Dannatt. He did not want Mastiffs for his army. He wanted FRES and he was not going to allow Mastiff to be bought because this might erode the funding stream for his pet project. His answer to the Snatch was the Pinzgauer Vector. As commander land forces before he became CGS, that was his baby.

Eventually, under considerable pressure, he very reluctantly agreed to take on a small number of Mastiffs, but only on the condition that they came out of the Treasury reserve and then on condition that they government bought some more Vectors. And we all know what happened there ... £100 million pissed up against the wall, five men dead, and many more who were very seriously injured. Thank you Mr Dannatt.

Then there were the helicopters. The Army could have had more machines. They could be flying now. It was offered more machines. The deal was to delay the absurdly expensive Future Lynx and buy-in off the shelf. Several options were put to Dannatt and he rejected every one of them. Future Lynx was his baby. He made it a resigning issue. The Army will get Future Lynx ... in 2014. Thank you Mr Dannatt.

And now the Saintly Dannatt – after making snide remarks about having to ride around in a US Blackhawk, when we could have been operating our own Blackhawks - is crying out for more UAVs to help deal with the IED menace. Good call, but why aren't they in place already? Ah, Mr Dannatt.

We did have a UAV in Iraq. It was the useless Phoenix, bought at the cost of £350 million which never worked properly – one of Mr James Arbuthnot's better decisions. Ministers wanted a replacement off-the-shelf. But Mr Dannatt wanted Watchkeeper, a £1bn project with all the bells and whistles. That was an integral part of the FRES project, Dannatt's baby.

Eventually, there was a compromise. Very grudgingly, Dannatt agreed to a very small number of Hermes 450s being bought, as long as they came out of the Treasury reserve, and did not affect the Watchkeeper programme. But they have never been properly integrated into the ORBAT as all the resource is going into developing and integrating Watchkeeper.

And now we need an "offensive counter-IED campaign" says the Saintly Dannatt because, unless we win this offensive, it could have strategic consequences. We've being saying that for several years and NOW he gets the message.

Yet, to the media, the Saintly Dannatt is a hero. To those who know better, he's a disaster. But then, the media have a narrative and two kids to support.