Of course they need more helicopters ... 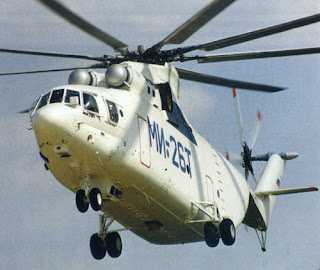 Challenged by Liam Fox as to why the defence secretary was not bringing more helicopters into Afghanistan, Ainsworth trotted out the "usual statistics" and then rounded on the shadow secretary, declaring, "I have yet to hear how he thinks we can get more helicopters in ... ".

Yet Ainsworth, in common with his predecessors, is fighting with his hands tied behind his back. He could bring more capacity into theatre within weeks – it could already be there, and could have been for years. But, for he or his predecessors to have done so would have been in the teeth of opposition from the military itself, which has blocked endless attempts to bring more machines into use.

Options on the table have included the leasing of Mi-8 MTVs and Mi-26s (pictured), of purchasing Blackhawks off-the-shelf from the American manufacturers, or buying and refurbishing US Huey-type machines – in use by US Marines and Canadian forces in Afghanistan.

Each time proposals have been made, they have been blocked – sometimes for good reasons, but none of the problems insurmountable. Mainly the blockages have been inter-service rivalry or because the military have been holding out for "better" machines, sometime in the future, as in the Future Lynx.

Maybe in 30 years time, historians will be able to get access to the government records and tell the full story of what has been going on, but the Future Lynx story also involves a strong element of "pork barrel" politics – keeping Augusta Westland in business – the future of the Army Air Corps, of which Dannatt is commandant general, and protecting Navy requirements for a light ASW airframe.

Perhaps a more robust, Churchillian prime minister could have cut through the maze of competing priorities and sectional interests and issued an "action this day" directive. But such is the febrile atmosphere that it would be a very brave – and foolhardy – politician who over-rode his "defence chiefs" and imposed his own choice on the military.

Any of the alternative options would have involved extra risk – over and above that of buying a fully kitted-out helicopter of a type already on the British forces inventory.

The Russian-built helicopters are not as reliable or as safe as the European and American machines, and there are problems integrating the full defensive suites into these airframes. Nevertheless, Mi-8s are in use with special forces in Afghanistan, flown by serving RAF pilots, and the users speak highly of them.

The Huey airframes are old, and have relatively limited capabilities, but they are better than the Lynxes in that they can operate in "hot and high" conditions, albeit with reduced payloads. As for the Blackhawks, they are currently on the US forces inventory, but even then there are problems with integrating the electronics and defence systems with the British fleet.

Thus are ministers handicapped. The British military has acquired a rare ability for finding "reasons" for not doing things it does not want to do, and then deflecting blame onto the politicians when the consequences become apparent, briefing all the while to a media willing to "out" ministers who "put troops at risk". They would just have to wait for one of the "minister's" helicopters to crash, and he would be toast.

The politicians have yet to find a way of dealing with this – a disease which was apparent in 1996 when Douglas Hogg deferred to his "experts" over BSE – which means government has become a process of ministers allowing their "experts" free rein, then acting as their spokesmen and taking the can when things go wrong.

Ainsworth is following in this long tradition and, in time, his successors will do the same. Fox could have put him on the spot, offering alternatives. But he too knows that, to promote them, he would have to take on the military – something he would not do, conscious that he would also be at risk of being denounced.

That in some way explains the current unreality of politics. Ministers and their opposition counterparts are emasculated, and cannot even explain why.