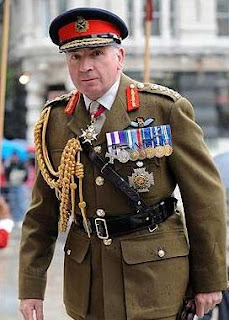 The D-Notices (or "Defence Advisories" as they are called) are flying around at the moment, keeping a damper on speculation on the "dodgy chopper" that went in at Sangin yesterday.

Sarah Montague for the BBC Today Programme was actually in Sangin this morning – flown in by a US Army Blackhawk helicopter with General Dannatt for an an interview. Yet, neither then nor on the web report did the fair Sarah mention the crash, even though it is the talk of the base and the biggest incident since the death of the 2nd Rifles soldiers last week.

Nor indeed has the British media covered the story, except for the briefest mention in The Times, where the helicopter is wrongly described as delivering "humanitarian aid". Yet, much of the BBC report was about helicopter capacity and here you have a 50-ton helicopter – the largest production helicopter in the world - delivering supplies to the base, crashing and burning not a mile from the gates, after being shot down by the Taleban, leaving seven dead.

And that does not even rate a passing mention? That isn't news? Pull the other one.

Instead, the media agenda is Dannatt wanting more targets for the Taleban boots on the ground. Thus we can see more young officers mowing the grass, with no sense of mission, getting shot for their pains. All that so the General and his mob can keep up with the Joneses Americans, while DFID build more latrines for grateful Taleban Afganis and erect another Ferris wheel.

The other item of the day is why Dannatt flew in an US helicopter, something about which The Daily Mail drooled, not realising – or caring – that much of the reason why we do not have enough machines is down to the saintly General himself, who has been shafting the Army ever since he took office as CGS – and before.

Of course, to turn the critical spotlight on the saintly General goes against the narrative and while Tom Newton Dunn is still beating the drum about the dreadful Lynxes in The Sun, he too is muzzled and cannot tell the full story.

For instance, every defence journo knows that the RAF is operating for the special forces Russian-built Mi-8 MTVs in Afghanistan. That is widely known in theatre and you can bet the Taleban know.

But we are not allowed to know ... there is a "D-Notice" out preventing us being told officially. And why? Well, if it was more widely known just how successful these machines really were – they were designed specifically for operations in Afghanistan – then there might be agitation to get more. And, with a bit of effort, we could have machines in place within WEEKS and a full squadron up and running in months, with as many more as we needed.

However, with a media only able to report under license from the MoD and its "D-Notice" system, this leaves the field wide open for the blogosphere. Except that, as my co-editor observed, the British blogosphere has largely sold its soul to the MSM, following rather than leading the agenda. If it is outside the "comfort blanket", most of them don't want to know.

So, when EU Referendum/Defence of the Realm comes up with a real scoop – "Moldavian gun-runners flying supplies to 'Our Boys' in dodgy choppers", while Dannatt swans about in US choppers because he personally blocked a cheaper alternative to his beloved Future Lynx - with the full backing of the Tory defence team and the defence contractors' lobby - no one wants to know ... EXCEPT this brilliant piece HERE, which has really got the point - and one more here.

Dannatt, however, is the saintly figure, that "fine soldier speaking out for his men". That's the narrative so the claque puts its brains into neutral and falls into line. It's all Gordon Brown's fault, doncha know.