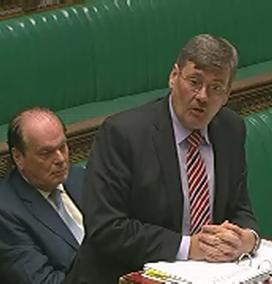 The heat is off. The Afghan issue, for the moment, will slide down the agenda, its force spent with nothing resolved.

Completing the government's counter-attack was David Miliband who, according to The Times "rebuffs generals and endorses UK's strategy in Afghanistan."

The thrust of his push was to "brush aside" complaints from the country's most senior generals and opposition leaders that "lack of helicopters and insufficient troop numbers had hindered the campaign and contributed to the deaths of 15 British soldiers since the start of the month."

Narrowing down problems in the campaign to these simplistic issues did – as we predicted - present no great challenge to the government, not least because neither of them represent the critical failings over there.

Instead, the narrow focus enabled Miliband to deny that the mission was poorly manned and poorly equipped. "We're not going to be able to do our mission in Afghanistan through tanks and helicopters alone. The great danger that our troops face is on the ground," he parrots.

Note how Miliband uses the word "tanks", raising a straw man, thus to be able to demolish it. And, with Ainsworth (pictured) making the same points (also referring to "tanks"), the opposition and the media have nowhere to go. They have said all they have to say on, and have nothing more they are capable of saying.

Interestingly, at defence questions, Ann Winterton asked whether some of the problems in the campaign stemmed from the failure of the development programme. By way of an answer, she was told how HMG had funded new schools and clinic. Funnily enough, there was no mention of a Ferris wheel – and definitely no mention of roads, thereby exactly making Ann's point.

More and more, I am convinced that we should NOT be funding schools, clinics and all the rest of the "touchy-feely" goodies that are so close to the heart of the FCO, DIFID and its bunch of left-leaning, gender equality luvvies.

On this, I am absolutely at one with Paddy Ashdown who tells us "to abandon the notion that we can make Afghanistan into a well governed state, with gender aware citizens and European standard human rights. It raises expectations we cannot fulfill and wastes resources better deployed elsewhere."

One of our tasks, he says, is gently to lower expectations in the Western world and bring our ambitions back into the range of the achievable. This will certainly be difficult and may well make those who attempt it, unpopular.

Although Ashdown does not say it, lowering expectations would fit well with seeking to achieve the doable ... building roads and basic infrastructure, opening out the country to enable governance and kick-starting the economy, paving the way for later improvements.

The trouble is, the Army can't do it. It hasn't got the money and, in truth, doesn't want to know. It sees its job as thundering around the countryside in its boy-racer kit, shooting up the bad guys. DFID and FCO do have the money but, in the absence of the "security" that the Army is never going to provide, cannot get stuck into a serious infrastructure programme.

In any case, neither department is interested. They will content themselves with funding the digging of latrines and wells in the countryside and supplying explosives fertiliser to the Taleban farmers, while they busy themselves in the urban "security bubbles", spending a fortune on "security consultants" to ensure their personal safety, developing their right-on gender equality agenda and building Ferris wheels for wimmin.

With Miliband defending his turf, DFID defending its (I neither know nor care who is the secretary of state), and the Army mowing the grass at ever-increasing cost, while the Taleban periodically slaughter its troops, nothing has changed or will change.

But, until the next time a newsworthy quantity of dead soldiers is loaded onto yet another C-17, the media can all go back to sleep and the politicians can go on their all-expenses-paid hols. Then, they can start over, making exactly the same points they made last time, to the taxpayer-funded backdrop of flag-draped coffins.