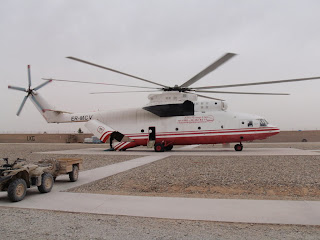 When it was raised in Parliament yesterday by the redoubtable Ann Winterton - the ONLY MP who raised the embarrassing report of a British-chartered helicopter ferrying military supplies to a British base getting shot down by the Taliban, Miliband and Ainsworth did NOT want to talk about it. The full exchange is here.

Of course, there is every reason why they should not want to be up front. Not only was the prime contractor Skylink subcontracting the work to dodgy Moldovan gun-runners – in breach of the contract requirements – the Moldovans were subcontracting the operating of the aircraft to an equally dodgy Ukrainian outfit, which explains why six of their number were killed.

Moreover, as more details come in, it is now very clear that this was a deliberate Taleban ambush, mounted directly under the noses of the British, aimed at bringing down a Chinook – one of the main strategic aims of the Taleban. The unfortunate Mi-26 happened to wander along, in company with an Mi-8 MTV. Both took fire and the Mi-26 bought it. Bad luck on the Ukrainian crew and bad luck for the Taleban. They wanted an RAF Chinook, and will keep trying until they get one.

As for Skylink, this is an aviation company that has no aircraft. It specialises in supplying aircraft in war zones for the UN and other tranzies like the EU, for NGOs and any shady outfit that happens to be passing with a dodgy cargo it wants moved in a hurry. It buys contracts top dollar, with brown envelopes passing freely. It is so corrupt that even the UN blew it out, until it bought its way back into favour by greasing the right palms.

The company then subs out the work down the chain to dodgy Moldavans, Ukrainians and the rest, mostly operating clapped-out ex-Soviet hardware with safety certificates that owe more to photoshop than they do any certifying authority, their aircraft banned from any and all Western airspace. These outfits work as a group, sharing and swapping assets when they get outed, forming and reforming companies, appearing and disappearing, and cropping up with new names and the same aircraft just as frequently.

These are the people that are working for the MoD, the contract carefully laundered through Nato to give plausible deniability, thus avoiding a Tory and media uproar when it was learned that the MoD was hiring dodgy ex-Soviet choppers to make up for capacity shortfalls.

The trouble was that the original arrangement was that the aircraft should serve the transport hub between Kandahar and Bastion. They were not permitted to fly into FOBs – that is military airspace, from which they were to be excluded.

However, once there, the mission creep set in and, with the desperate shortage of lift, the brief was extended to the aircraft uplifting into the FOBs like Sangin. The Ukrainians, desperate for cash, were squared off with generous bonuses and thus agreed to fly into hot war zones, where even RAF Chinooks will only fly with Apache escorts.

The MoD was happy, being able to release Chinooks and Apaches for operations, Skylink was happy with the extra hours and the bonuses, and the Ukrainians at the sharp end needed the money anyway. And hey! They are expendable.

As long as the contract was piggy-backed off Nato, and thus totally deniable, no one had to be told and everyone kept schtum ... including the Tories. And now, no one wants to talk about it. Says Ainsworth: "I do not want to trespass on to operational details." You bet he doesn't.

As for the Tories, having decided to make "helicopters" their cause celebre, the last thing they want to know is that the Taleban are parking outside the gates of British bases, waiting for an opportunity to down a Chinook. Rather shoots the Fox - to coin a phrase - about more helicopters saving lives.

So goes the conspiracy of silence. The British media ... forget it. E-mails from special advisors? MPs' expenses? Dead safe ... nay problem. If you look too deep here, you don't live.