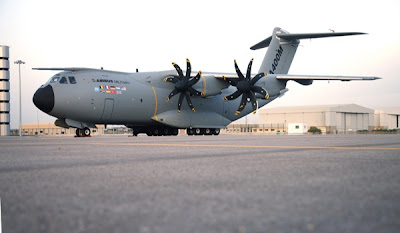 "I am the resurrection, and the life: he that believeth in me, though he were dead, yet shall he live: And whosoever liveth and believeth in me shall never die".

Well, the defence ministers of the seven countries mad enough to want to buy the thing certainly believe in it. Way beyond the fourth day, the Airbus A-400M has risen from the dead, and is on its way to becoming a real aeroplane. Certainly, we're getting to the point where we wish the damn thing would fly, as we're getting sick of endlessly posting computer graphics to illustrate posts on it. The one above is the real thing, by the way – firmly earthbound.

For the non-blog readers to get to know what is going on, though, they will have to go to Reuters or even the New York Times, or the BBC website. I don't know what it is about these European projects, but the British media never seems to report on them. It was the same with Galileo – they just drop off the edge.

Anyhow, at a meeting between the seven yesterday, all parties – including the UK - decided not to cancel their orders and instead renegotiate the whole contract, starting afresh as it were, with plans to "relaunch" the programme in December, when it is hoped that the prototype will make its first flight.

This is the projects that is already €5 billion over budget and nearly four years behind schedule. Its customers have already spent €5.7 billion on it, the parent company EADS has written off an additional €2.3 billion and it is costing €100 million a month without ever having left the tarmac.

Yet our own defence procurement minister Quentin Davies is right up there, despite the huge problems the delay has created for the RAF. He has agreed to enter the renegotiation "on an equal footing" with it six partners and is saying "I hope we can save the programme."

It can still be cancelled in December, if the negotiations break down, but that is looking increasingly unlikely and, if this goes they way all European projects seem to go, the only outcome of the further talks will be that it is going to cost us a whole bundle more. And when it is actually going to be delivered to the RAF is anyone's guess.

The huge irony is that, whatever it costs, a Tory government will most likely have to pay for it, while it will be a Tory defence minister who will be have to explain why, in a few years time, the RAF is critically short of airlift. And Tory turncoat Mr Quentin Davies, by then on the back-benches, will be able to reflect that it was a Conservative government which bought into the project into the first place. What comes round, goes round.