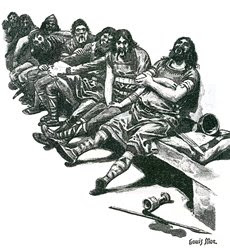 At first I imagined that I was treading in the footsteps of William Morris who had written about Iceland; then I checked my facts (always a useful thing to do) and found that though Morris had visited Iceland at least twice and translated several of the sagas he had not written any books that could be called news from Iceland. He did write a poem about the country and published his travel journals, though. That's just as well because I am not exactly a follower of William Morris: a great deal to be said for his designs but his literary output is heavy going and his political ideas are mushy to put it mildly.

W. H. Auden, on the other hand, is a man I admire greatly; just in time I recalled that he and Louis MacNeice (less admired but good nevertheless) wrote a book together, called Letters from Iceland. That's all right, then. I do not mind treading in their footsteps though it is unlikely that I shall ever produce poetry one tenth as good as Auden's.

Right, on with the motley. (Hey, you have to keep up on this blog.) The government of Iceland has, as we know, applied for EU membership, which was not the cause of unalloyed joy either in that country or in the existing Member States.

Now we have a couple of updates on the situation from Hjörtur J. Guðmundsson of the excellent EU News from Iceland. This posting analyzes poll results about EU membership in Iceland.

Polls asking if people wanted to start membership talks (aðildarviðræður) with the EU have almost always resulted in a majority in favour.

Polls asking if people wanted to apply for membership (umsókn um aðild) of the EU have almost always resulted in a majority against.

Polls asking if people wanted to join the EU have usually resulted in a 50/50 situation.The first two examples obviously contradict each other. But this has an explanation. For years people in favour of EU membership have claimed it was possible to enter some kind of a non-obligational "scouting talks" with the EU just to find out what kind of a deal Iceland would be able to get.

Of course, as the talks progress the Icelanders will realize that those non-obligational, exploratory talks are more mythological than the Viking heroes of old. And as Mr Guðmundsson points out, there will have to be a referendum before Iceland actually joins. Not to mention the possibility of the government falling.

In another article on EU Observer Mr Guðmundsson deals with that familiar canard that countries in the EEA might as well join the EU because they have to adopt most of the legislation, anyway, while having no hand in shaping it. Anyone would think that Britain a fully paid up member of the European Union had any say in that legislation but let that pass.

In any case, Mr Guðmundsson says, this is not true.

In the spring of 2005 research carried out by the EFTA [European Free Trade Association] secretariat in Brussels at the request of the Icelandic foreign ministry, however, revealed that only 6.5 percent of all EU legislation was subjected to the EEA agreement between 1994 (when it came into force) and 2004.

In March 2007 a report published by a special committee on Europe commissioned by the Icelandic prime minister, showed that some 2,500 pieces of EU legislation had been adopted in Iceland during the first decade of the EEA agreement. The study also found that about 22 percent of Icelandic laws passed by the parliament originated from the EU during the same period of time.

The totality of EU legislation is according to various sources around 25,000 to 30,000 legal acts. Total Icelandic laws and regulations, however, are around 5,000. Of those there are less than 1,000 laws, the rest is regulations. Even if the entire legislation of Iceland came from the EU it would only be around 20 percent of the total acquis communautaire.