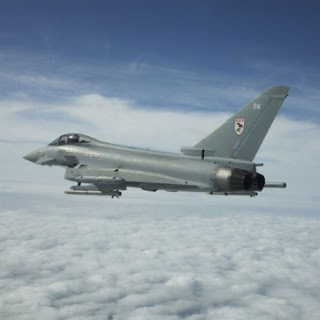 We will probably never know quite the degree of wheeler dealing went on, but the much unloved and hideously expensive Eurofighter has met its match – called financial reality.

According to The Times, a final deal has been done on the Tranche 3 purchase, with the RAF set to lose more than 70 of the planned fleet, the total order cut back from the original 232 to a mere 160.

This was bedded in today at a contract ceremony in Munich, when Britain signed up for the third and final tranche, agreeing to buy 40 more, instead of the planned 88. Of these, 24 will be sold to the Saudi Arabians, leaving just 16 for the RAF, says The Times, which like many others seems to have been confused by the original statements.

However, the MoD is saying that the RAF is actually to get 40 new aircraft, the 24 referred to being replacements for the Saudi batch already taken out of stocks intended for the RAF.

Nevertheless, it is clear that production is to be slowed down so that the delivery period will be stretched. The last of the tranche-three aircraft will come into service between 2015 and 2020, just as the first batch of Typhoons - in service today - would be coming to the end of their life.

On that basis, it is anticipated that the RAF at any one time will operate a fleet of no more than 120 aircraft at any one time – with a smaller number actually operation.

This is perhaps just as well. In answer to a recent written question from Nick Harvey, procurement minister Quentin Davies revealed that the operating cost per hour of a Eurofighter is £90,000, compared with the air defence version of the Tornado, the F3, at a "modest" £45,000.

Davies hopes that, as the Eurofighter fleet expands, unit costs will drop. But, with this latest announcement, it looks as if this will not be very substantial. Thus, as Heseltine's folly roars through the skies at airshows, delighting the crowds, we can reflect that it is actually costing us £25 per second. It would be difficult to burn money that fast. As for using the aircraft against the Taleban, it would be cheaper to buy them off.

And once again, we have the ultimate irony. Having delayed Tranche 3 for as long as humanly possible, the former Labour government - deposed by the Tories, as is confidently expected in 2010 - will have the quiet satisfaction of seeing a Conservative government having to pay for it.