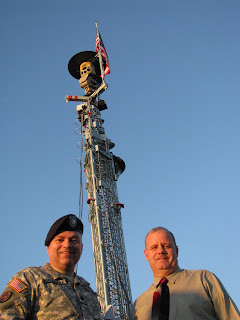 In The Sunday Telegraph today we see a report by defence correspondent Sean Rayment, telling us that, last summer, senior Army officers serving with 16 Air Assault Brigade wanted to build a "necklace" of fortified watch towers through Helmand to spy on insurgents planting IEDs.

We are then told that the plan was based on "the success of a series of watch towers erected in South Armagh in Ulster in the late 1980s to counter the activity of the IRA." Despite this, it was dismissed "because there were not enough troops available to occupy the towers or a sufficient number of helicopters to keep them resupplied with food, water and ammunition."

More on Defence of the Realm.
Posted by Richard at 01:45