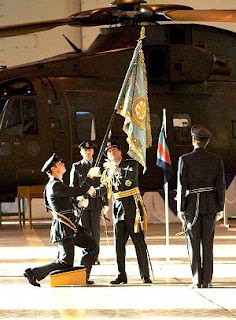 Jon Lehman, secretary of the Navy in the Reagan administration, has a pop at spiralling inflation in defence costs in the WSJ today.

When John McCain was shot down over Hanoi in 1967, writes Lehman, he was flying an A4 Skyhawk. That jet cost $860,000. Inflation has risen by 700 percent since then. So Mr. McCain's A4 cost $6.1 million in 2008 dollars. Applying a generous factor of three for technological improvements, the price for a 2008 Navy F18 fighter should be about $18 million. Instead, we are paying about $90 million for each new fighter. As a result, the Navy cannot buy sufficient numbers. This is disarmament without a treaty.

This, as readers will know, is a theme we constantly revisit, in which context the reference to the Skyhawk is rather appropriate. In March, two years ago we quoted Ed E. Heinemann, designer of the Skyhawk as well as the B-26 Invader and the A-1 SkyRaider. He was lamenting:

The obstacles to any simplification may seem insurmountable, and the reasons for more complexity are many and powerful. But if we permit this Frankenstein of complexity to continue to work at its current plodding, insidious rate, it will slowly overwhelm us to impotency.

That is, of course, what is happening now, if you think about it. Despite our current financial travails, we are still one of the richest nations on earth and, here we are taking on the rag-tag Taleban in one of the poorest nations on earth, and we are in the middle of a funding crisis over maintaining a reinforced brigade, with supporting elements, in the field.

Banging this drum, as one does, one wonders what it takes to drive the point home, one that comes into high focus when we look at the cost of the Merlin helicopters that Jock Stirrup is "busting a gut" to get into Afghanistan.

Ann Winterton and I have looked very closely at the costs of these machines and have established that the original acquisition cost of the RAF operated Merlin Mk 3 was around £19 million, with a total operating cost per hour of approximately £34,000.

Then there were six, unused Danish machines that were bought to supplement our fleet. These, we were told cost £29.3 million per individual aircraft. And, in order for them now to be despatched to Afghanistan, they need an "upgrade". That, we are told equates to "an estimated average of £1.8 million per aircraft".

Thus, Stirrup's Magic Merlins are working out at about £31 million each. I don't know about him "busting a gut" the taxpayers will be, in having to pay for them.

The Danish Merlins are, in fact, an interesting case study as their acquisition arose from the very strong pressure from government on the MoD to increase helicopter capacity in Afghanistan.

At that time, in late 2006/early 2007, the Mi-17 option was being heavily pursued, with an offer to supply a number of machines for an all-in cost, including military-trained pilots, of £3,000 an hour – with the further option that the RAF could acquire its own airframes at about £3 million each – perhaps £6 million by the time all the "bells and whistles" had been fitted. Up to twenty of these machines were being considered, which have the same load capacity as the Merlin.

Horrified at such a cheap solution being offered, the RAF went into overdrive, inventing every possible excuse as to why the Mi-17s could not possibly work - not to RAF standards, etc., etc., - despite already having secretly acquired six airframes for the arduous role of supporting the Special Forces.

Publically though, with the help of its industry lobby and pork-barrel MPs, it managed to sell the idea of acquiring six new Merlins which had just been delivered to Denmark, which the RAF then proceeded to absorb into a brand new squadron. This was celebrated by a happy little ceremony in January 2008, when the MoD chirped that the Royal Air Force element of the Joint Helicopter Command had received "a substantial boost".

Unfortunately though, "Our Boys" did not get to see this "boost". The aircraft were completed ready for service in May 2008 but, although they had been bought specifically for Afghanistan, as set out in Defence Management, they were simply added to the existing pool of 22 aircraft operated by the RAF, used for churning up the skies around RAF Benson in comfortable Oxfordshire.

Then the RAF pulled a blinder. Having pitched for the additional Merlins as the solution to the capacity problem in Afghanistan - it "decided" unilaterally that it was too difficult to set up a logistics and support chain in that theatre to support a new type. It therefore intended to limit the type to Iraq, where there was in fact no great need for additional machines as the campaign there was in the throes of winding down.

As to the apparent advantages of acquiring a common airframe to add to an existing fleet, there are still substantial differences between the RAF and ex-Danish Merlins. The Cockpit layouts and the radar differ to the extent that additional training had to be provided, even for pilots who might not be flying these Merlins on a regular basis.

The result is that, some more than two and a half years after the government had told the RAF to sort the problem of helicopter capacity in Afghanistan, and committed the well over £180 million to make it happen, there are still no Merlins in theatre. The likelihood is that they will not arrive until early 2010 – and even then there will be operational problems.

Thus, fashionable though it might be to load all ills on Gordon Brown and his "penny pinching", we have a situation where money has been thrown at the problem of helicopter capacity – with the acquisition of an absurdly expensive machine – and it has still not yielded dividends. This is "impotency" writ large, for which the buck seems to stop at the door of an RAF which seems intent on its own brand of disarmament.