A breakdown of democracy 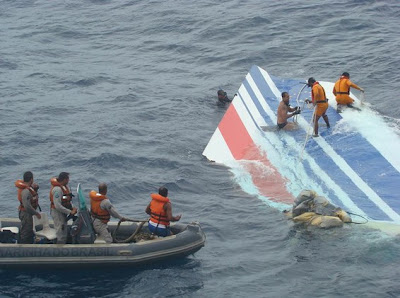 At the beginning of this month, we drew attention to the dark role played played by the European Aviation Safety Agency (EASA) in the crash of Air France flight 447. Subsequently – not having recovered the flight recorders and, apparently contradicting earlier evidence – the French accident investigators decided that the role of the crucial sensors, the pitot tubes, was only a "factor" in the accident and not central to it.

This effectively gets EASA off the hook, except that now, it seems the Union of Air France Pilots (SPAF) ain't buying it.

They have accused both EASA and France's DGAC aviation authority of failing to prevent the Bralizilian tragedy which killed 228 people, by ignoring earlier warnings about faulty pitot tubes.

In a letter to the agencies, Gerard Arnoux, the head of SPAF, says: "For years the crews of A330/340 aircraft have been reporting cases of loss or variation of airspeed data in severe weather conditions." He goes on to say that "Appropriate measures" from either agency would have "helped prevent the sequence of events that led to the loss of control of the aircraft."

Not mincing his words, he then asserts that it was the "responsibility" of both agencies to "force the manufacturer Airbus to make the necessary changes" to the defective sensors, charging that a presentation had been made to the EASA in September 2007 as proof the agency was aware Airbus pitot tubes had suffered "a significant number of operating incidents linked to icing over or heavy rain."

Although Air France had decided on 12 June this year to upgrade all the sensors on its long-haul fleet, this action came only after protests from pilots. Neither the DGAC nor the EASA instructed Airbus or airlines to take any action.

The DGAC, like our own agency, the CAA, is now subordinate to EASA which, as an EU agency, has the supreme power and is the lead safety certification authority. Totally unresponsive to member states and with no democratic control – reporting only to the EU commission but not responsible to it, EASA is effectively a law unto itself.

Unsurprisingly, therefore, it has not responded publically or even commented on SPAF's charges, and there is no direct means (or any) by which the Air France pilots could call the agency to account. It would also be unsurprising if, as an EU agency watching over the Airbus project – which is near and dear to the heart of the EU – it had been influenced by issues other than safety in not taking any action.

As part of our totally unaccountable government, the agency thus illustrates when the normal mechanisms of democratic governance break down.