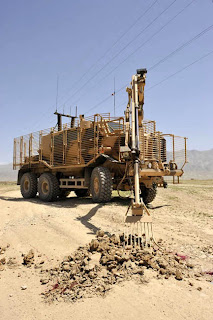 "Army bomb expert killed trying to clear the way for vital supplies" is the headline under which Nicholas Cecil, chief political correspondent for The Evening Standard writes today.

Captain Daniel Shepherd died instantly when the makeshift bomb he was trying to defuse exploded in the Nad-e Ali District in Helmand province, southern Afghanistan. A member of his team suffered minor injuries. Capt Shepherd, 28, from 11 Explosive Ordnance Disposal Regiment, The Royal Logistic Corps, was leading a team trying to clear a route for a convoy to re-supply Nato troops and the local population.

This raises serious questions. There is a whole raft of kit available for this task. Why wasn't it available?

The job starts with the Buffalo (pictured above). It can expose an IED and the claw apparatus can be used to rip away any command wires, if that is the method of triggering employed. The manual disturbance will trigger any motion-sensitive booby trap.

If the bomb is still live, it can be investigated by a remote robot (pictured below). A shotgun fitted to the robot can be used to blast the detonator and thus disable it. Failing that, the robot can be used to place an explosive charge on the device, blowing it up and thereby neutralising it. Damage to roads and other structures can then be dealt with by armoured engineering vehicles.

Only in extreme cases, where there is imminent risk of loss of life without intervention, should an attempt be made by a bomb disposal officer personally to disarm a device. There are no indications that this was the case here.

However, as to the kit, therein lies the tale. Kit such as the Buffalo is not yet in theatre. The US forces have them, the Canadians have them and the French also have them. But, despite a call for them to be provided in 2005 – the MoD did not think they were necessary. They were not ordered, therefore, until last October and will not arrive until next year. 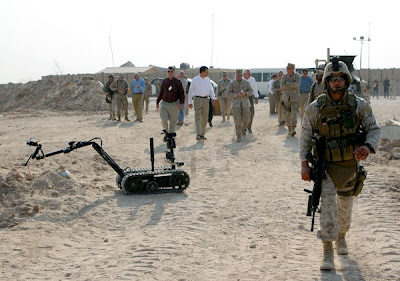 We do have robots – the British were pioneers in this technology. However, they are transported in the unarmoured "Tellar" EOD vehicles, which are themselves highly vulnerable to IEDs. They require an armed escort and route clearance to get them onto site. All too often, they cannot be used.

But our Mastiff EOD vehicles were not ordered until last October and will not arrive until next year – despite the equivalent JERRVs having been used by US forces since 2003.

Then, there is a shortage of armoured engineering equipment. What we have is being sold off at knockdown prices, and the new kit was not ordered until last October. It will not arrive in theatre until next year.

Of course, if we follow the media and political narrative, this incident clearly demonstrates that we need more helicopters. Every casualty is being used to reinforce that argument.

But what it could also demonstrate is that the MoD and the Army seriously under-estimated the IED threat and failed utterly to prepare for it. Such issues, however, will not even begin to be explored by the media. The solution is obvious – we need more helicopters. Everybody knows that.