And then there were nine 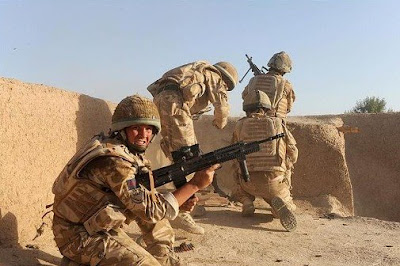 Two more soldiers have been reported killed in Afghanistan, bringing the total to nine dead in nine days. From the media perspective, this brings the total number killed since commencement of operations in 2001 to 178 – one short of the number killed in Iraq.

There is no point in bemoaning this fact or criticising it – that is what the media does. Throughout both campaigns, it has defined its coverage by the number of dead, hovering vulture-like over the mortality reports, feeding off the misery and despair that accompanies such events.

The sour note, however, is certainly merited as, in my view, if the media had spent a fraction of the effort in addressing some of the deficiencies in the military which had made so many of the deaths preventable, maybe many of the deceased would still be alive. But the media has dropped the pass, preferring instead to run with the tired old mantras of "under-funding" and "over-stretch", for want of addressing the more complex issues.

Yet again though, those mantras have come out to play, this time following Nick Clegg's intervention in the "debate" on Afghanistan.

Their champions this time are the pressure group United Kingdom National Defence Association (UKNDA) which has warmly approved Clegg's contribution to the debate, with the Association's chairman, Winston S Churchill - grandson of the British prime minister – leading the fray.

He notes that Nick Clegg is "the first party leader to draw a direct connection between the scale of losses in Afghanistan and the lack of resources given to our Armed Forces." He adds that, to be successful the campaign in Helmand, "requires a much greater commitment by Britain and, as the Liberal Democrat leader says, a new and more robust approach."

Churchill thus hopes that "other party leaders, on both sides of the House of Commons, will join Nick Clegg in acknowledging the indisputable fact that our Armed Forces are chronically under-funded and over-stretched due to the longstanding squeeze on the defence budget."

The man then goes on to declare that, "They must give a firm pledge not only to exempt the Armed Forces, while at war, from any general budgetary cuts, but also, at the earliest opportunity, increase the resources available to all three Services."

Clegg also gets the support of the Telegraph's Con Coughlin, who applauds "the Lib Dem leader's blatant act of opportunism in breaking with the cross-party consensus on Afghanistan" and asks "Who is going to stand up and fight for our short-changed soldiers?"

One can admire the sentiment, as indeed one can understand UKNDA's anxiety to get some traction but, in the final analysis, neither Clegg nor the Association are doing our "short-changed soldiers" any favours. As long as the debate is stuck in the groove of "under-funded" and "over-stretched", it is going nowhere.

For the reason, one does not have to look very far and, indeed, it can be found in Coughlin's piece. The Lib Dems, he writes, are Britain's most accomplished political opportunists. He thus observes:

In normal circumstances, one might expect criticism of the Government's handling of a major military operation overseas to be dominated by the main political parties. But the failure of both Labour and the Conservatives to address the glaring shortcomings in our Afghan campaign has left the field wide open for Mr Clegg to take centre stage.

One would not expect Labour to criticise their own performance in the campaign, nor openly censure the military for its performance – for fear it might reflect badly on the government – which leaves the Conservatives as the main player.

Here, we have written too many pieces on their failure to want to repeat the experience, but the point stands – that the lacklustre and superficial nature of the debate stems as much as anything from the lack of engagement from the main Opposition party. And, where there is no political engagement, it is very difficult for the media to keep a controversy running until it comes to a conclusion.

To that extent, the media can hardly be blamed for its lacklustre performance, if you accept that its role is reactive, responding to the political agenda rather than setting its own. Many in the media – who spend a great deal of time and energy trying to set the agenda – would disagree with that premise but, in military affairs, it does seem to be the case that the hacks have been content to let the politicians – and some of the military – to set the agenda.

Now they, like opposition politicians, are in a quandary. Slowly, insistently, the case is building which shows that the two faithful mantras by no means define the issues, and they are proving to be something of a millstone for the Conservative opposition.

As it gets closer to taking its turn in the administration, it too is going to have to confront the reality – that there is no extra money, and that throwing what little it has is not going to solve any of the underlying problems. The Conservative Party, therefore, is going to have to invent a new narrative.

One would like to think that the media too can reinvent the narrative, and start examining our military adventure in Afghanistan more closely – and indeed the conduct of our military generally.

There is some sign of that happening, as the more honest journalists see the money flooding into Afghanistan - £3.5 billion this year – for very little effect, despite the optimism of Brigadier Tim Radford, the commander of Task Force Helmand, who said yesterday that the troops on the ground were winning the battle with the Taleban.

But, when the bell tolls for the 179th – which can only be a matter of days, if not sooner – we could perhaps reflect that we owe it to those who have died, those many more who have been injured, and those who put themselves in harm's way, a little more than a few tired old mantras and a bucket-full of political opportunism.