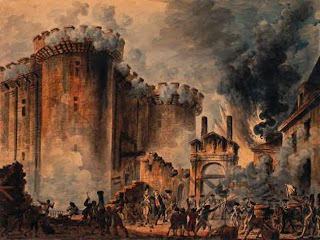 I was going to quote from the Marseillaise, as it is quatorze juillet, but no appropriate words presented themselves and, in any case, as every school child ought to know but probably does not, Le Chant de guerre pour l'Armée du Rhin, otherwise known as La Marseillaise was not composed till 1792. So, the cry "á la lanterne" will have to do.

For it seems entirely fitting on this day to remind everyone that we of the Third Estate do not remain obedient for ever. The day comes when we lock ourselves in a tennis court and swear an oath to deal with matters; I am sure most of our readers know what happens after that. Ah ça ira, ça ira, ça ira … (OK, that was not written till 1790 either but the spirit had been there from the beginning.)

All of which is a preamble to the fact that, with the boss's agreement I am announcing that I am now officially p****d off. So is he and we shall come to that.

This morning I received an e-mail which was relaying a request from a well-known and undoubtedly highly paid journalist to find out for him when the last opinion poll about the Lisbon Treaty had taken place in Britain. The journalist in question writes for a number of publications, including The Spectator and the News of the World and is one of the media bloggers who have taken over the British blogosphere and tamed it to become part of the political establishment.

My rather surly response was that the journo in question is paid considerably more than I am (not that that would be difficult at the moment) and can do his own digging. Undoubtedly, I have just lost an ally, shaky though that alliance was.

Later on I found out something that annoyed me even though I knew that the annoyance is childish. When Better Off Out was relaunched we wrote about it on the blog (here and here) regardless of the fact that there was a very clear indication that we, as mere writers and researchers would not be asked to any of the meetings, not even to brief the parliamentarians of various stripe. Our material may be used though, unlike that of Open Europe, it will probably not be acknowledged.

One gets used to being on the wrong side of the green baize door and both the boss and I shrugged our shoulders. That is the role of the Third Estate until such time …

Frankly, the events have not seemed all that exciting though the occasional link from the blog might have been useful. After all, EUReferendum has done the odd posting here and there about the EU. And I was delighted when Tim Montgomerie, the onlie begetter of Conservative Home (now shared with Jonathan Isaby) joined the organization. The more the merried, thought I, and Tim is a good egg all round, if a little too entranced by the goings-on inside the Conservative Party.

Discussing his membership with certain gentlemen of the Taxpayers' Alliance I asked when they were going to be gracing Better Off Out with their presence. In response I got one charming and enigmatic smile and one equally enigmatic comment that there would be news some time in the autumn that I shall be very pleased about. Can't wait.

Today I find that Mr Montgomerie, unlike the poor plebs, was invited to a parliamentary meeting of BOO, not, one assumes, to brief the politicians but to join in the general mutual congratulatory session.

Now, do not get me wrong. This is not about Tim Montgomerie, who is a good friend and ally on issues that are truly important. It is not even about the unnamed but clearly delienated journalist who thought that some unpaid skivvying from someone more knowledgeable was in order.

The reason I am officially p****d off and the boss is spitting tacks is because much of it is part of a pattern. Our work is lifted with no acknowledgement, let alone payment. This has been particularly noticeable in the last few days when everybody suddenly started rehashing without much comprehension what the boss has been laboriously putting together for many months.

Our postings are ignored unless some specific information is needed.

By not joining the establishment and persisting in running an independent blog we have put ourselves beyond the pale, a problem both the boss and I have faced before.

The question is why carry on. Yes, it is true that over the years our work, rarely acknowledged unlike the rather inadequate production and downright nonsense produced by some of the grander organizations (we all know who they are), has helped to turn opinion in the country. When I compare the debate now with that of 1992, the year of Maastricht, when I first became involved I cannot help noticing how far we have moved and I cannot help claiming credit for those of us labouring behind the green baize door, allowed into the drawing room occasionally to bow and curtsey to the aristocracy.

Nevertheless, treading water, being ignored until the information is inescapable when someone else claims credit for producing a messy version of it, is not particularly pleasant and the time has come for us, the boss and me to rethink the whole situation.

This posting is laying down a marker. It will not be linked to the forum because at this stage any discussion will be counterproductive. But, well, ça ira, ça ira, ça ira …
Posted by Helen at 23:37