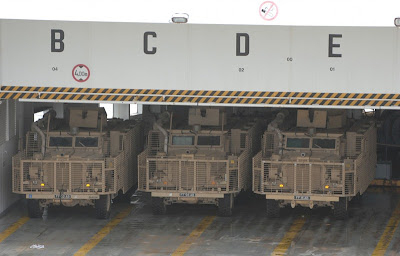 As of Friday, the British military presence in Iraq comes to an end. There will be no flags, no parades, no speeches and not even a formal withdrawal – just an administrative mess.

The warning signs were there in June when plans for Britain's final military mission in Iraq were in disarray, with no formal agreement finalised to maintain in place a Royal Navy detachment and upwards of 400 troops after the 31 July deadline, when the bulk of British forces were required to quit Iraq.

On the back of the ejection of the main force, this was the one diplomatic fig-leaf which enabled the British government to keep a toe-hold in the country and thus continue the pretence that we were still welcome.

However, even that has fallen apart. A "draft accord" which had been approved by Iraqi ministers in June allowed only 100 personnel to remain and that had to be ratified by the Iraqi Parliament. But, according to The Guardian, using an agency report, the Parliament has gone into recess without ratifying the instrument, forcing the remaining British personnel to leave the country by Friday.

Officially, of course, they have not left. They are being stationed over the border in Kuwait, pending the resumption of parliamentary business, whence it is hoped that the British detachment will be allowed to return in late September.

Defence secretary Bob Ainsworth is saying that the government has been "deliberately keeping a low public profile" on the issue - so as not to increase the risk to UK forces, he says. It is nothing to do, he might say if asked, with trying to conceal the humiliating prospect of British personnel having to scuttle over the border to avoid physically being ejected.

An MoD spokesman said US troops would stand in for British troops while they were out of the country, and explains that the "pause" is due to a "procedural delay," leaving the MoD website to laud the heroic work of the removal men, as the last ship sails for England with a batch of Mastiffs (pictured), there to be refurbished and sent to Afghanistan.

The Daily Telegraph tells us that the ratification was opposed by followers of Muqtada al-Sadr who stalled the process. That opposition should have come from that source is hardly surprising. But prime minister Maliki cannot have invested a great deal of political capital in trying to push the agreement through, if Muqtada's men were able to stop it going ahead.

The New York Times notes that the other two small remnants of the coalition, the Romanians and Australians, will also be gone on Friday, if not before, leaving the Americans as the sole members of a multi-national force which has seen contributions from 38 separate states.

My guess is that is how the situation will remain. Come September, the ratification will be quietly parked and the well-rested British personnel in Kuwait will be quietly found a flight home, where there will sneak in anonymously, with nothing more said. And that truly will be the end of what has been one of the more inglorious episodes in British military history in recent times.

And we leave not even with a whimper but ejected by a "procedural delay" which even the British government wanted to keep "low profile". Our presence lasted from 20 March 2003, when British troops crossed into Iraq, to 31 July 2009. And, in two days time, it's over.