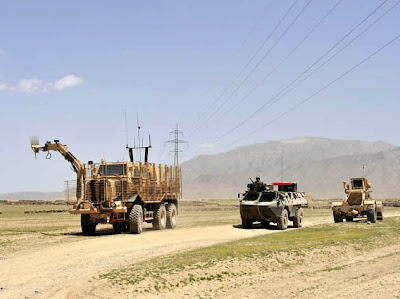 Major General Julian Thompson, victor in the Falklands and all-round good-egg, writes in the letters column of The Daily Telegraph today, asking whether the way to avoid casualties in Afghanistan was to "follow the German, French and Spanish example and not fight?"

He goes on to add that the government obsession with a European defence identity has wasted money on Euro-projects, instead of buying cheaper, better equipment off the shelf. He is thus answering the rush of propaganda from Nick Clegg, Lib-Dim leader, who has been exploiting the equipment "crisis" in Afghanistan, arguing for greater European defence co-operation as a way of resolving the problems.

He was, for instance, in full flow in The Independent on Saturday, asking: "why is Britain dragging its feet on European defence co-operation that would allow us to pool resources with the French and others so we can get more bang for our bucks?"

As a very rough estimate, however, we calculated that excess costs arising out of European defence co-operation came to £8.8 billion, either in failed projects or excess costs. That would buy a ridiculous 35,000 RG-31 mine protected vehicles or 350 Chinook helicopters.

Amongst the more egregious examples of waste were the "Trigat" projects - medium and long-range anti-tank missiles. British participation in these European projects (appropriately, developed by "Euromissile") cost us over £314 million before we had to pull out after the systems failed to deliver, leaving the MoD with a total loss.

A rush purchase of US-built Javelin missiles had to be made to equip the Army, which now form a basic (if expensive) part of our armoury in Afghanistan.

With not so much as a blush, though, Clegg tells us that our priorities must change for a rapidly changing world, so that we invest in what's most likely to be needed: helicopters, mine-resistant armoured vehicles, unmanned aerial vehicles, intelligence gathering systems, strategic airlift, as well as the more traditional effect of manpower.

One wonders whether, in terms of "strategic airlift" he is thinking of that wonderful example of European co-operation, the A-400M. Clearly, that is the answer to all our problems.

When it comes to mine-resistant armoured vehicles though, the French do have the answer (pictured top), which we would do well to emulate. In April this year, they had delivered to Afghanistan three US-built Buffalo route clearance vehicles, plus Husky mine detection vehicles (which they call Souvims). 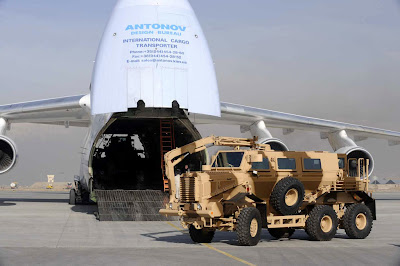 The vehicles were, incidentally, delivered in an Antonov 124 (pictured above), proudly announced by the French defence ministry, who seem to have no problems using this Russian-built strategic airlift. In fact, VAB armoured personnel carriers similar to that accompanying the Buffalo in the top picture were also delivered by an Antonov 124.