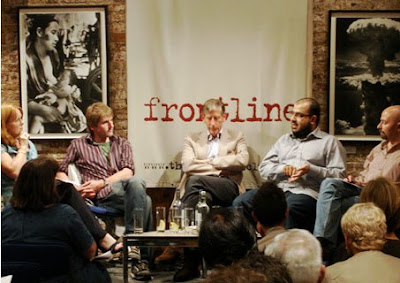 One of the penalties of being exiled to Bradford, 200 miles from the metropolis is that for what is a Londoner, an evening with an early return home becomes a major expedition – requiring forward planning, considerable expense and much exhaustion, not least because one tends to cram in as much as possible into the day to make the trip worth it.

Thus, the Frontline Club talk yesterday, which started at 7 pm began for me at 6.30 in the morning and ended up, after a grueling 400-mile round trip, with me falling into my pit at 5 am this morning, having driven through atrocious weather, a barrage of road works and a thicket of speed cameras, the verdict from which has yet to be delivered.

Inevitably, therefore, such a concentrated diet of impressions takes a considerable amount of digestion before a coherent view can be formed. It says something though, that earlier in the day, I had given a talk about the book to a small gathering at a private lunch and my attempt to give the "short" version, with some insight into the political ramifications, took an hour and a half. Yet there I was at the Frontline club expected to give an overview in 20 minutes and then take part in a panel discussion for an hour or so, covering the same territory.

Originally billed with General Sir Mike Jackson on the panel, he pulled out at the last minute, for reasons unexplained (apparently he has a reputation for that). The meeting was thus chaired by Bill Neely, foreign editor for ITN News, with the panel comprising myself, Kim Sengupta from The Independent and with Deborah Haynes, defence correspondent from The Times standing in for Gen Jackson.

To a packed audience, with standing room only (close to a hundred people), I chose to focus the talk very tightly on just one aspect of the British occupation of Iraqi – the lack of appropriate equipment – which, I averred, contributed significantly to the military defeat. Much to the concern of the management, who discourage the use of Powerpoint presentations, I chose to illustrate the presentation with pictures of key equipment and despite the reservations, it seemed to work well enough.

Memory then is a faulty instrument; players always find it hard to describe the action. But, of the contributions from the audience – including two passionate Iraqi expats – there is and will continue to be that difficulty in unravelling those two separate (albeit linked) episodes of the invasion and the subsequent occupation. Many of the questions were thus focused on the invasion and issues related to that.

That further reinforced by the response today to the launch of the Chilcot Inquiry, where it is clear that Tony Blair is to be the star of the show in what looks as if it will become a media three-ring circus.

As to my general thesis – that the occupation of Iraq was a military failure – there was in fact a strong measure of agreement from the panel and the chairman, and indeed a view that many of the same mistakes are being repeated in the campaign in Afghanistan, about which there was very little confidence expressed. It there was a consensus view, it is most definitely that the Military is paving the way for another glorious defeat.

The impressive Kim Sengupta disagreed that the lack of equipment was the primary factor in the failure of the British, arguing that the root cause was the arrogance in the Military, a belief that they knew it all, and a rooted obstinacy in refusing to learn any lessons from the experience.

A former soldier in the audience added his voice, referring to the retreat from al Amarah - which I had identified as the pivotal moment in the failure of the campaign – saying that the campaign had been lost long before. By then there was no political will to continue with an aggressive prosecution of the counter-insurgency action.

Not disputing any of these views, I made the point that the lack of equipment was symptomatic of that greater malaise. I offered my own thesis - not unfamiliar to readers of this blog – that military equipment is the window into the soul of the Army.

Look at the equipment an army fields (and does not field) and that will tell you how they intend to fight. You do not need to interview the generals as to their intentions – they are revealed in the order of battle, in which context the continued use of the Snatch Land Rover told a story more eloquent than a brace of self-serving memoirs.

The Army, in effect, was telling you its own story, there to see if you understood the language. It illustrated the points made and was symbolic evidence of them.

Chairman Bill Neely neatly put Deborah Haynes on the spot, asking her why the media did not pay more attention to equipment. Her view, if I have recorded it accurately, was that equipment alone was not "very sexy" and it was not until there were "body bags" to go with it, as had been the case with the Snatch Land Rover, that it became a story.

This precisely accords with the impression that I have formed of the way the media thinks. If I did hear correctly, then it is a stunning confirmation of part of my thesis on media behaviour.

Neely himself invited me to explore by broader thesis on the failure of the media, noting that, while I had criticised the British media, I had relied extensively on British sources for my book. My point was that, while much of the information supplied was valuable, I had found that I had not been able to assemble from the British media any sense of a narrative of the conduct of the occupation. I had had to trawl many different sources, the most valuable – in helping me construct a framework – being the Arab press and insurgent sources.

Thus, as far as it goes, the British media offered many reports, but failed entirely in presenting a factual narrative which would put the material in the broader context. In that sense, I told Neely, Sengupta and Haynes afterwards, a rounded account is like a string of pearls. They had provided many pearls (and some dross) but not the "string" with which to bind them into a coherent whole.

Anyhow, those were my first – or at least, abiding – impressions of the meeting. There was much, much more and I hope that, should the video of the meeting become available, I will be able to do a much more comprehensive review of what was a fascinating event.