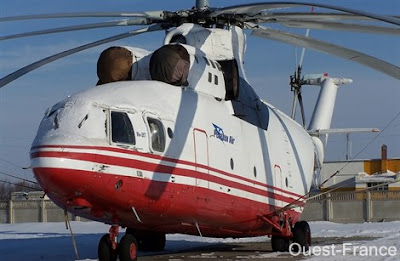 From here, speculation that ER-MCV was under contract to the MoD as an asset not declared to Nato. It may, therefore, have been working solely for the British.

The contract, according to this source, was for logistical resupply only. UK and Nato troops were not authorised to fly on the aircraft without ballistic protection and self protection suites. This asset strictly moved cargo, supplied largely by British Forces.

The asset and contract is said to have been managed in theatre by SkyLink Aviation. According to this presentation, the MoD has a charter arrangement for two Mi-8 MTVs and one Mi-26.

The caveat that troops were not authorised to fly on the helicopter(s) without protection suggests that troops may have been lifted on occasions and, therefore, this time it could have been a matter of luck that none were on board.

If this is true, the notoriously secretive MoD has struck again. When the Canadians decided to hire Mi-8 MTVs, they were completely open about the intent, thus answering critics about the shortfall of lift capacity.

Given the pressure Brown has been under – and still is – one further wonders why he did not declare the use of these machines which, cumulatively, add 28 tons to capacity, nearly equivalent to three Chinooks.

Of course, by Wednesday's PMQs, he would have known the fate of ER-MCV and the speculation that it had been shot down, plus the history of the machine and its primary operator, could have proved a tad embarrassing had the Tories raised it – given that they knew.

There is such a thing, however, as a "Privy Councillor's" briefing, where senior opposition members are briefed in confidence and given secret material, on the condition that it is not disclosed. Cameron could have known the background, therefore – although we should not bank on it – in which case he would have been constrained from raising it.

On the other hand, it is known (don't ask) that the Tories have been opposed to leasing civilian capacity in theatre, and it is quite possible that the MoD has been withholding information on this charter deal simply to avoid political controversy, not least fallout when (as now appears to have happened) a machine crashed. The Tory view is that all effort should be provided by the RAF with MoD-owned assets.

Either way, the information emerging seems to point to this being a British supply helicopter (in the sense that it was working for the British), which was shot down on its approach to a British base, possibly in circumstances that the Taleban were trying for an RAF Chinook.

That the Taleban presence was such that they were able to mount (an apparently successful) attack on a helicopter under the noses of the British suggests a degree of strength, one the one hand, and a degree of vulnerability on the other, that should inform the current debate on helicopter usage in Afghanistan.

But the questions also remain as to why the British were relying on an aircraft operated by a company which had been banned from flying in EU member state airspace on safety grounds, and which has been associated with arms trafficking.