The Mail on Sunday can reveal ... 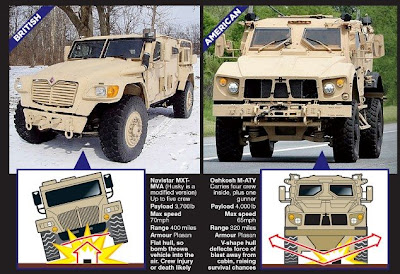 ... this in today's newspaper ON THE FRONT PAGE, about the Husky. You may notice a similarity with this ... dated 3 April. There is a link to the full story here, with an honourable mention of Ministry of Defeat. The story, online, has been considerably updated as of midday, with much extra detail including the Vector story, and extra graphics.

The issue was raised on the BBC's Politics programme, with Drayson asked specifically about the Husky. As has proved normal with this man, he lied ... saying that the Navistar Husky was in use by US forces. It is not.

On the broader front, I've picked up over 20 stories in the Sundays I would like to review ... and I am working on some of them now. Booker has done the Ferris wheel story in his column, which gets us off to a good start.

Meanwhile, both the Ferris wheel and duff trucks appear in The Sunday Express. The duff trucks have been done here, as well as here and here. The story is getting out.

Then, I suppose you have to smile at this. The Independent "reveals" Brown's secret plan to cut the number of troops in Afghanistan by 1,500. On the other hand, The Observer "reveals" that Brown is set to increase troop levels by 2,000.

They can't be both right of course – and my bet is that neither are.