Round and round in circles 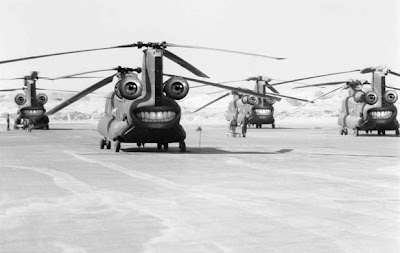 In a leading article, The Independent is actually saying: "It is not only helicopters we should be concerned about." Sheesh! It took them long enough!

Our forces are still buying their equipment to fight in the Cold War era, it says – otherwise known as the Fulda Gap syndrome. A comprehensive rethink on is called for, the paper says. Our troops have been in Afghanistan for eight years. The problems ought to have been addressed long ago.

It goes on to say that there is little point in playing a political blame game. That will not help our forces on the ground. Yet we do need honesty from the Government; a recognition that there is a problem with the orientation of our military.

Then it picks up on the Gates initiative, noting that the US political system is beginning to address similar problems, with the US Senate voting to cut funding for the F-22. The world's most advanced military machine is adapting to the demands of the 21st century battlefield. Britain urgently needs to do the same.

The New York Times offers a bland but informative piece about the USAF and its future plans to develop UAVs and The Guardian picks up on the British problems with UAVs. The contrast is enough to make you weep.

With suggestions that one of Osama Bin Laden's sons might have been killed by an UAV strike, The Daily Telegraph offers us an analysis, telling us how useful UAVs actually are, but does not make the link with our own lacklustre performance.

Bob Ainsworth, who had been claiming forever that we have enough helicopters in theatre, is now doing a Jock Stirrup and telling us that he is "busting a gut" to get more out there. We learn from him also that helicopters are not Ford Mondeos. I think we knew that though.

Nothing has really changed though. The Daily Telegraph is obsessed with catching out Lord Malloch Brown on his comments about (not) needing helicopters – the ones Ainsworth is "busting a gut" to send to Afghanistan, even though we do not need them.

This paper publishes the transcript of Mary Riddell interviewing Malloch Brown, who tells the star reporter that there is a very large, well-armed, American contingent fighting alongside the British. To show us how much on the balls she is, the fair Riddell responds: "But we're the ones who are being killed. And we're the ones who are less well-equipped. And we have the fewest number of helicopters."

What Malloch Brown should have said is, nooooo ... There have been 19 British killed this month, and 33 Americans. In total, while 188 British service personnel have lost their lives in Afghanistan, 750 Americans have lost theirs. Instead, the idiot says: "Yes."

The Americans have more troops in theatre than us, of course, but we do have Allan Mallinson, also writing in The Daily Telegraph, declaring that: "The more you use, the less you lose." That theory doesn't seem to be working terribly well, but then Mallinson is telling us that this dictum applies to conventional war.

That leaves The Guardian to ponder about what would happen if there were enough helicopters.

It asks: "What does it say about the control Britain claims to have over Afghan territory eight years on, if the only safe way troops can move around is by air?" And what if the cash-rich Taliban got their hands on surface-to-air missiles, as the mujahideen did before them? It would make communications with all forward operating bases vulnerable. Pull on one thread and the carpet unravels.

There are no good options after eight years of warfare, the paper concludes, only least worst ones. We should stop pouring more oil on to this fire and start thinking of realistic outcomes. And we should be doing this now.

Is it any wonder that people are confused – baffled, even? We go round and round in circles and never seem to be getting anywhere.