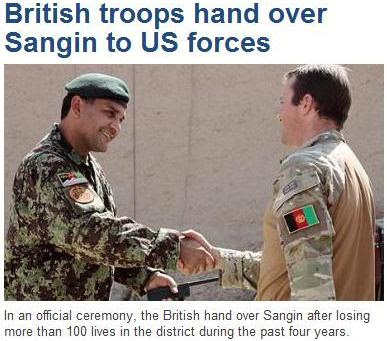 Most of the papers carry the "news " today, that British forces have scored yet another great victory in the global war on terrorism, handing over the now pacified town of Sangin to the grateful forces of his excellency president Karzai, who will now extend his kindly rule over the friendly and prosperous inhabitants of this bustling market town.

This victory follows in the great tradition of recent campaigning in Afghanistan, where British forces can now add Sangin to the growing list of towns and settlements pacified, which include Now Zad, Musa Qala and Kajaki, and where the US forces can only stand back and admire the sheer skill, dedication and fortitude of the UK military and its leaders.

The template for this success, however, was undoubtedly forged in recent times by the experience in Iraq, where the British military brought us the stunning success of the al Amarah campaign, followed by its storming success in Basra, which has earned the undying gratitude of the Iraqi people – those that survived the experience.

But for those who think such successes are recent, we need to look back 70 years where, this weekend we were able to celebrate another great victory where the RAF so successfully beat off the German air force that the citizens of London and elsewhere only had to endure another eight months of bombing and a few tens of thousands dead and injured – plus hundreds of thousands of homes and properties destroyed - as the Luftwaffe roamed almost without challenge in the barely-defended night-time skies.

And so the lessons of the past transfer to the future. Says Sir Stephen Dalton, the current Chief of Air Staff, "winning the Battle of Britain was vital to the overall outcome of the war ... Unless we had control of the skies over Britain we could not build up the forces ready to liberate Europe later on."

"That is entirely relevant today," he adds. "Without the freedom of the skies in Afghanistan there would need to be 10 times the number of soldiers and marines on the ground to achieve the same effect." And as with the Luftwaffe of the past, we only have to count the wrecks of the Taliban air force to know how true this is.

We are so lucky that we have such wise and foresighted leaders who will guide us on the path to yet more and better glorious victories in the mould of Sangin. And the Afghanis simply don't realise how lucky they are that we happened along at just the right time to save them and their beautiful country.

UPDATE: Nice piece from Thomas Harding - the only thing that will change is the nationalities on the tombstones.