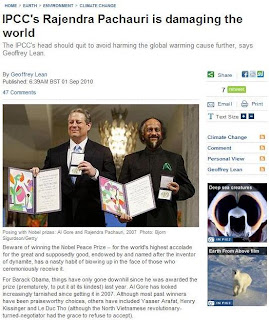 When Geoffrey Lean takes agin Pachy, the world is coming to an end for the old charlatan.

"No fall from grace has been so unforeseen as that of Gore's co-winner, the Intergovernmental Panel on Climate Change," says Lean, making you wonder where he has been all this time.

"Just two years after picking up the prize, the UN organisation – chiefly criticised until then for its caution in interpreting the growing evidence of climate change – was plunged into controversy, after it was found grossly to have exaggerated the rate at which Himalayan glaciers are melting," he adds.

There in the background is Amazongate and Africagate, and all the others - there but unspoken as the commentators freely talk about "errors" in the plural, forgetting how adamant Pachauri has been about there being only one mistake ... in the singular. This "one single error", he kept saying again and again. The others are "not errors", he says. See the video.

Moonbat looks pretty damn stupid with his comments and its interesting how quiet he is now. So, incidentally, does The Sunday Times and The Sunday Telegraph. If only they had held out a little longer, it would have saved us all a lot of grief.