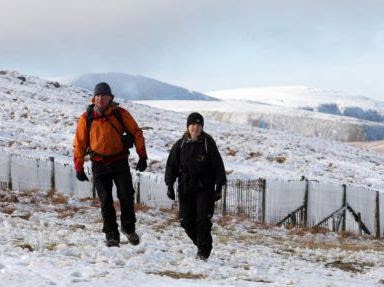 Reported by the Scottish Daily Record and now picked up by The Daily Mail is the news that the Cairngorms in Scotland saw a coating of snow last weekend (pictured above). Temperatures in the Highland mountain range plummeted below freezing as a couple of inches of snow fell , despite it still being September. Now The Record is quite openly saying that the snow - before the end of offical British Summer Time - has sparked fears we could be facing another long, cold winter.

Nor is this – as you might expect – an isolated event. Other parts of Scotland also suffered their coldest September temperatures for nearly 30 years as double figures sank to below zero and frost appeared. Kinbrace in the Highlands was the chilliest place, recording a temperature of -4.4°C, while Loch Glascarnoch had its lowest September since 1993, at -2.6°C.

The paper quotes STV weatherman Sean, who has reviewed the current weather patterns and is saying: "At the moment it does look like there's a good possibility we'll have another cold, snowy winter."

It certainly does have that feel about it. Two hundred miles further south, where we run into winter without even the briefest Indian summer to fortify us, we have been resorting to central heating for the last three days. A certain weary cynicism thus overtakes as as we observe the shenanigans on the election of the Labour leader. Noting how it is that the winner if Ed Miliband, former energy and climate change secretary, it is he who shepherded the Climate Change Bill into law.

Despite tht fact that this legislation is set to cost us £18 billion a year, all to deal with the hypothetical effects of climate change, it is a testament to the detachment of the poltical classes that this has not harmed his political career.

But now bloweth the cold wind of reality. And despite the best efforts of the politicians and the media to keep it from the general public, the growing cost of Mr Miliband's extravagence is becoming more and more evident. Many a career is going to be destroyed by another bad winter. It would be so nice if Mr Miliband's was one of them.