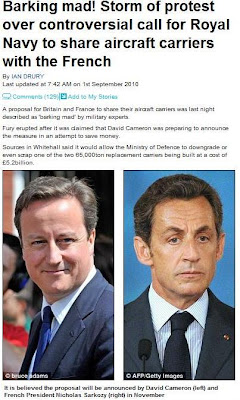 There is much huffing and puffing about a proposal to share with the French one of the aircraft carriers currently being built for the Royal Navy.

This is being described as "barking mad" by military experts, a quote taken from the naïve Commander John Muxworthy, who thinks that the plan would jeopardise the UK's military independence and place security of the nation in the hands of France, our oldest enemy.

An MoD insider is also cited as saying that: "We could find ourselves in a very difficult situation if we wanted to carry out an operation using the French carrier, and it was blocked by politicians in Paris."

Well, these people want to wake up and smell the coffee. The whole thing is a done deal and has been since UK and French defence ministers (ours was Portaloo, I think) signed an agreement in 1996.

This was the UK/France Letter of Intent (LOI) on "co-operation and areas of mutual interest in maritime defence" and came as one of a series of agreements which was started by Major and carried on through the Blair administration with the St Malo agreement. It now picks up where it left off, with the Cleggerons.

Some of the highlights of this series are as follows:

On 30 October 1995, at RAF High Wycombe, they inaugurated the Franco-British Euro Air Group whose aim is to strengthen the two air forces’ interoperability, complementarity and ad hoc planning capabilities. On 1 January 1998, this became the European Air Group.

During the State visit in May 1996, M. Chirac and Mr Major signed a declaration of intent providing for the setting-up of the Franco-British Joint Commission on Peacekeeping, which is now working on a regular basis.

The Saint-Malo summit in December 1998 saw the signing of a cooperation agreement on crisis management and operations and the issuing of a joint declaration on European defence. This initiative gave a major boost to the discussions on a European defence dimension, which is a priority for both governments.

At the Anglo-French annual summit in London on 25 November 99, the talks focused on European defence. A joint declaration sets out ambitious targets for strengthening European military capabilities.

Thus, we are back with the post-Maastricht agenda, where Major then agreed to an extension of European defence "co-operation", which was further strengthened at Nice and Amsterdam and then again with Lisbon.

Already, way back in 1996, the Major government agreed to formalise naval co-operation with the French, covering a "very wide range of activity", including operations. Twenty formal Working Groups were established under the direction of the British and French Chiefs of Naval Staff.

Of course, we wrote about this many times – but no-one took a blind bit of notice ... just the Eurosceptics, and North in particular, getting worked up about nothing. People have such short memories, and seem to forget the 2006 agreement on carrier development, when it all became settled policy.

After Blair, Gordon Brown was less enthusiastic but with Clegg and Cameron, the "project" is back on track. We are not getting anything new, but a continuation of policy which has been signalled very clearly at every step of the way. That it apparently comes as a shock is simply a reflection of nobody wanting to see what was in front of their very eyes. Now it is out in the open, they are all flapping their hands.

But one thing they have right - it doesn't make sense to share one carrier. The only logical thing to do is share all three – two UK and one French - to make it a joint force, complete with the escort group. And that is what has already been agreed. It is just a matter of time before we see it in action. European Navy here we come.

Expect now, also, that the JSF is junked and we end up buying the French Rafale. I always said this might happen, such as back in May 2008. Once again nobody took any notice.

But then we had all those assurances that Cameron was a "Eurosceptic". Surprise, surprise, the agenda goes on. Anybody who thought this was going to be different has their head stuck in the sand – or somewhere more odiferous. Nor does it make a blind bit of difference having 13th Century Fox in place as a supposed Eurosceptic. He is either too stupid to realise what is going on, or too ambitious to care.

In any event, it was always pre-ordained. There was nothing much he could have done about it as the agreements have already been signed. And Cameron has just made it certain. All those little Tory Boys who voted for him should hang their heads in shame.