I really do hope 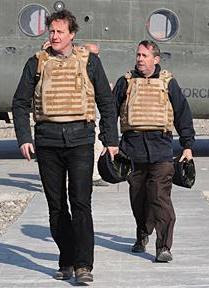 ... once again, that all those Hooray Henries who rooted for Cameron as defender of the armed forces are now having a good look at themselves as the implications of the strategic defence review begin to emerge.

You might have expected me to have followed the process in some depth, adding to the "great debate" from the experts and pundits as to which way our defence policy should go. The problem, though, is that there hasn't really been a great debate, not in any sense of there being a strategic review.

What this is about, and what it was always going to be about, is cost-cutting. The process then becomes a money-grab, with each of the Services fighting for its share of the loot and trying to protect its favourite "toys". Thus, the chances of us emerging with "leaner, fitter" armed forces are next to nil.

In fact, as we now see from Liam Fox's reaction, the financial top-slicing risks having a devastating effect on the forces' morale. So we have the defence secretary complaining: "Frankly, this process is looking less and less defensible as a proper SDSR and more like a 'super CSR'" (comprehensive spending review)".

But why is he so surprised? As long as there is a divorce between foreign policy and defence, as, we pointed our earlier, this was always going to be a "strategy-lite" review. That means that it could only be about spending.

It is there that the dereliction of our foreign secretary begins to be apparent. Throughout the entire review process, he should have been putting down markers on Britain's place in the world, aiming to shape the review and thus ensure that the foreign policy interest was paramount. Instead, he has been silent.

Looking back, we have not had a single speech of any weight or significance which might have been taken as a foreign office contribution to the strategic defence review. Then we get his intervention yesterday, when he elevates "climate change" to the top of the league.

Without any sense of surprise, we have noted the inability of the media to remark on the absence of foreign policy input to the defence review. It thus has to be unsurprising that it fails to note the perversion of policy and the absence of the foreign secretary from the debate.

Much earlier, my erstwhile co-editor confidently predicted that in William Hague we would have the worst foreign secretary in history, and so far she is stacking up to be right. But then, this is only to be expected from a man who is the right hand to a lightweight whose grasp of foreign policy seems to embrace a belief that we were a "junior partner" to the Americans in 1940.

Going right back to the beginning, the great concern about Cameron was always that he was a policy-lite leader. The concern turns out to have been fully justified. Now, with the chips down, we are seeing the effects of that inability to "do" policy - and it doesn't get any more serious than failures to craft foreign and defence policies.

Hague as worst foreign secretary, therefore, has to be seen in the context of his being a member of the worst government in living memory. After the last administration, that is going to take some doing, but it looks to be the only superlative that Cameron and his merry men (and women) will ever merit.