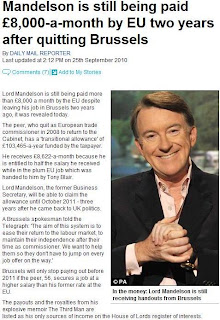 There can be no justification or moral imperative which requires anyone to pay tax to a system which permits this, the wholesale raiding of the public purse. The picture of Mandelson (left) is priceless, and says it all.

But if the EU commissars are at it – as always – so are the MPs with another lapse of judgement that will cost us a small fortune.

All this, of course, pales into insignificance when we end up paying a hidden tax of £1.2 billion for the latest windfarm scam, but there is something particularly loathsome about these individuals creaming off the system. These people are, as we have observed, indulging in wholesale acquisition of micturition.

Turning to the great statesman Thomas Jefferson, it was he who said that, "When the people fear their government, there is tyranny; when the government fears the people, there is liberty." And without dwelling on the issue of whether we have reach the state of tyranny, it is certainly the case that too many in government have lost their sense of fear.

How we return them to that state, without wholesale slaughter, must be one of the most pressing issues of the day for, without the people able to impose meaningful sanctions on our politicians, there is no restraint which will prevent more and more of this type of abuse.

Jefferson was the great upholder of the right to bear arms, and considered the ultimate safeguard against tyranny to be the armed militia. Although he did not say so explicitly, the logical and only consequence of his advice is that, should our politicians get out of control, we must be prepared to take up arms against them and, if necessary, kill them.

I do not actually think we are there yet, but we are heading in that direction – and I would always argue from an exception with anything to do with the EU. If anyone slaughtered the entire corps of the EU commission – eurocrats and all – I would not shed a single tear.

That is why warnings are necessary. Jefferson was no fool and history does tell us that, eventually, people lose patience with abuse of power. The response is nearly always ugly and violent. The likes of Mandelson may feel they can acquire the product of micturition at their leisure. But the reprisals can be abrupt, brutal and permanent.