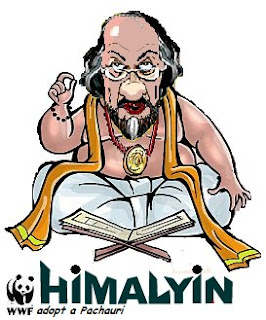 Now we have The Financial Times adding its voice to the throng, noting that the time has come for Rajendra Pachauri to move on. But one wearies of the follow-through suggestions that the IPCC "needs stronger leadership to maintain credibility".

The FT thus thinks that a rejuvenated IPCC leadership could tackle the deficiencies in its review process. It says this should become more inclusive, welcoming alternative views where these are scientifically valid, and at the same time more exclusive, rejecting unsubstantiated claims of dramatic change.

But the paper is wholly wrong. The whole point of AR4 is that if you strip out all the unsubstantiated claims, there is no case for the Armageddon scenario that its authors wished to portray.

It was in the absence of such material that they cast around for material that would support their case, whatever the provenance. The senior authors and editors knew exactly what they were doing, people like Martin Parry who were instrumental in setting it up.

Having Pachauri in place to back them up was all part of the grand scheme, and changing the leadership will not change the basis of the project. Of course he should go, but it would be better if he was not replaced and the collective of nations walked away from the IPCC.

The whole thing was based on a lie - is based on a lie. And, whatever leverage Carter Fuck might have been able to exercise on The Sunday Telegraph, the High Court in Delhi branded Pachauri a liar. Nothing will change that - the man is a consummate, practiced, serial liar, and he is head of the IPCC.

The thing about so many of the warmists in this context is that they think I am as stupid as they are. For sure, I make the odd mistake, get confused about some things and get some details wrong. But my underlying research is sound.

Thus, I would be perfectly happy to stand up in court and defend myself ... many people know of my role in the MacDonalds case and I could repeat the whole charade. It would cost them millions and me just my time - I have nothing else to lose.

It matters not whether they rise to the challenge though - they lose either way. The main accusations against Pachauri stand, and I would be seriously foolish if I had not also salted away some additional material, to use at the appropriate time.

And eventually the truth will out. Then there will be some reckoning because this thing has gone too far and cost too much for people simply to walk away and forget that it ever happened.