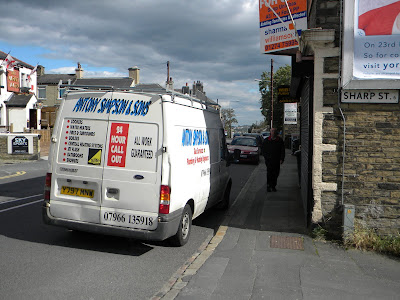 "Once the police forces of this country could have relied on fierce public support against cuts in their funds and manpower. Now I think they will get very little," writes Peter Hitchens. He adds:

The police forces of this country have broken their covenant with law-abiding people and now they lack friends when they need them most. If they had listened to me instead of being so sensitive, this would not have happened. Flattery is not the same as friendship, and criticism is not necessarily hostile.

But it is not just helicopters and fast cars. The above scene shows the obstructed junction at the top of our road – where cars and vans regularly park, blocking the sight line and making joining the main road a dance with death.

Yet this is clearly a breach of the Highway Code, where Article 242 states: "You MUST NOT leave your vehicle or trailer in a dangerous position or where it causes any unnecessary obstruction of the road."

However, according to West Yorkshire Police, who came out to look at our problems, this is just the Highway Code and not enforceable – despite being referenced to the Road Traffic Act 1988, Section 22. This says:


If a person in charge of a vehicle causes or permits the vehicle or a trailer drawn by it to remain at rest on a road in such a position or in such condition or in such circumstances as to be likely to cause danger to other persons using the road, he is guilty of an offence.

But the Police deny that this law applies. They have said categorically that they are not prepared to take any action and will not even now respond to our calls. Well, the government can cut their funds to the bone for all we care – in fact, the harder the better. Stuff them.