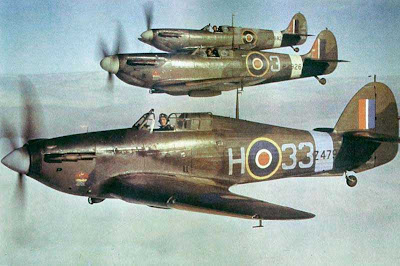 Expanding my collection of Battle of Britain books, I made the mistake recently of buying the highly regarded "With Wings of Eagles" by Michael Korda.

He is your classic "above the line" author, former editor-in-chief of Simon and Schuster US, a Brit living in New York with a host of titles to his name. And, in the acknowledgements to this one, he thanks his assistant, the "invaluable Mike Hall for his dedicated research skills" and Kevin Kwan "for photo research".

I think, in this context, the general rule is that you should never trust an author who does not do his own research. This would certainly stand up here. In the centre of the book is a two-page full-colour version of the above photograph, with the following caption:


A Hurricane Mk 1 (foreground) and two Spitfire Mk I's in the sky over England, summer of 1940.

To anyone with a little knowledge of the Battle, they will know this to be false. The pale blue band round the tails of the aircraft was a marking that was not introduced until the spring of 1941. No Battle of Britain aircraft carried this marking, so the photograph cannot have been taken in the summer of 1940. In fact, it was taken by Charles E. Brown in September 1942. And the Spitfires are not Mk Is, but Mk IIs.

Now, you would not expect the ordinary person to know this, but you would expect someone writing a book on the Battle of Britain, with his own research team, to be aware of such detail – and to get it right.

Given such an egregious error, what confidence can you have in the rest of the book?

But, actually, there is a broader issue here. One can almost advance the thesis that it is a characteristic of the "above the line" fraternity - be they politicians, broadcasters, journalists, celebs, writers, historians, academics, or whatever - that they will always get it wrong. The more famous they are, the more highly-regarded they are, the more celebrated they are, the more likely this is to be true. 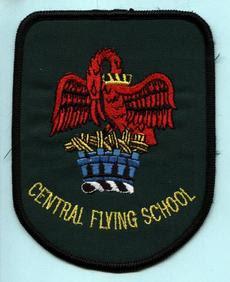 UPDATE: the joys of having a forum. One of our readers reports on having found the photograph with its original caption:

"A Hawker Sea Hurricane IB in formation with two Supermarine Seafire IICs of 760 Squadron based at Yeovilton. This fine study was taken on 18th November 1942."

Is it possible for Korda to have got it more wrong? And is it possible that so many get it wrong? This blogger here seems to have the definitive answer ... August 1942 it is, a Hurricane and Spitfires from the Empire Central Flying School based at RAF Hullavington. The nose art is the "Red Pelican" (right).

COMMENT: Battle of Britain thread
Posted by Richard at 13:12