And yet more stupidity 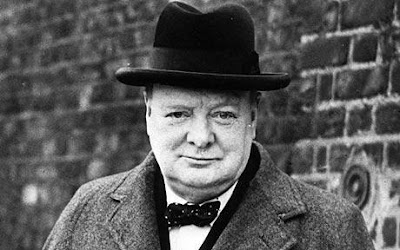 This time, it is here in The Daily Telegraph, plus this, the first of a series in the search for a defence strategy.

In promoting its series, the paper invokes the spirit of Churchill, proudly displaying his photograph (above), perhaps unaware that the great war leader's primary foreign policy objective in the early days of the war was to get the United States to join in on the side of the British Empire. This, perforce, would then require the UK to conform with US defence policies, which became the case.

The secondary point which emerges, therefore, is that it is a waste of time and effort talking about strategy without reference to foreign policy. The primary requirement is to ensure that the strategy conforms with and thus supports the foreign policy.

Such things are so basic that those who ignore them can, quite rightly, be accused of stupidity. But there is probably something more sinister here – the wilful refusal of the establishment to confront its own mistakes and admit that we are no longer an independent nation, able to determine either its foreign or its defence policies.