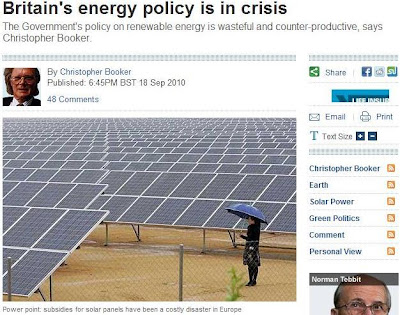 When you hear that a government minister is endorsing a proposal all hospitals should in future be built on hills, to stop them being submerged beneath the rising seas brought by global warming, you really have to start worrying.

This, of course, is Spelperson, but she doesn't personally advocate digging up hospitals and relocating them, in her recent statement or even in last week's speech. And nor even will you find that in the official government report which has caused some excitement.

Nevertheless, with The Independent having set the hare running, Booker picks it up in his column and has a bit of fun with it, before moving on to the serious stuff about renewable energy policy.

It is all desperately worrying, as the government's policy of "massive self-delusion" is based entirely on the need to meet EU renewables targets, yet – as Booker explores in some depth – they are just about as mad as putting your hospitals on wheels and trucking them up hills to keep them dry.

The only problem is that the policies are not so obviously mad, and there are a lot of people who stand to make a lot of money out of them, which means that they have a long way to go before someone pulls the plug – so to speak.

But, with her speech last week, it is very clear – as if there were any doubts – that it isn't going to be Spelperson who pulls the plug. Read the Booker column and weep ... as usual, and wonder how it is that a supposedly intelligent species can go so utterly mad.