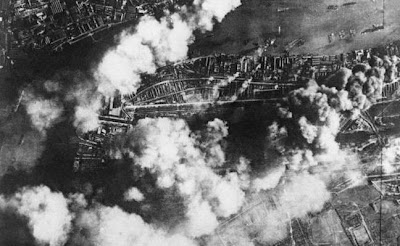 It is rather ironic that there should be a tube strike in London today, leading to the inevitable headlines describing Londoner's "misery". The irony, of course, is that today is the 70th anniversary of the start of the Blitz in London, when Londoners truly had something to be miserable about.

The MSM is offering a variety of fare, but much of it is "stream of consciousness" stuff that does not help the reader understand the great events of that time. One of the more interesting pieces is this one in The Guardian, while this treatment of the pictures has a certain draw. But it is The Guardian which seems to be doing the better job, offering an interactive timeline on events.

I will be giving the day full treatment on The Days of Glory, although I have to say that it is very hard going trying to separate the myth from reality. The BBC, of course, majors on how the Blitz "brought us all together", which is only one part of the story.

In fact, while the reporting of the war was supposed to be the BBC's finest hour, coverage was so dire and "tedious" that listeners were deserting in droves to German stations, to find out what was really going on.

But the darker side of the London Blitz is hinted at by The Guardian which gives us the bare statistics, but then tells us that 5,000 Londoners slept in Epping Forest that night.

These were the trekkers, the existence of which is barely recognised in the literature and represents the tip of the iceberg, a huge "self-help" movement by the population, responding to some enormous incompetencies and inefficiencies of local authorities and central government.

Many things were done extremely well, other things not so, and yet others were done very badly indeed - details of which have been suppressed. The full story, therefore, has not even begun to be told. It is going to take some telling!

COMMENT: Battle of Britain thread
Posted by Richard at 10:32