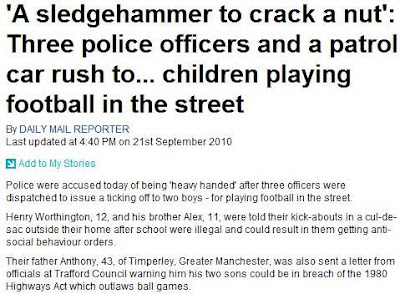 I was tempted, albeit only for the fraction of a nanosecond, to write about Chris Huhne. But even the thought of writing about this retard was just too much to bear. In any case, I'd already provisionally marked up this story (see above) for my overnight piece – yet another example of the incompetence and lack of proportion of modern-day officialdom.

But as my erstwhile co-editor is fond of asking, was it ever any different? And the answer to that is probably no. Whenever state systems are put under stress and anything serious is demanded of them, they tend to foul up, as this remarkable piece from Ritche Calder attests – published exactly seventy years ago yesterday.

This, I've built into my own latest post on the events all those years ago and I am now convinced that the period towards the end of September was the time when the British government came closest of all to losing control, and possibly facing an insurrection.

The evidence of a major U-turn is there, even despite draconian censorship by a Ministry of Information which was actually the model for George Orwell's MiniTruth. In his book 1984, he was describing Soviet Russia, but the model also drew from his experiences of London in 1940 (where he was living at the time), the British government and the BBC.

All of this serves to reinforce my general contention that no good can come of vesting too much power or resource in the apparatus of the state – whether police or any other institution. They will always mess up. And therein lies our problem. We have allowed a situation to develop where the state has too much control. The example above and many others (too many) illustrate that we have a lot of clawing back to do.