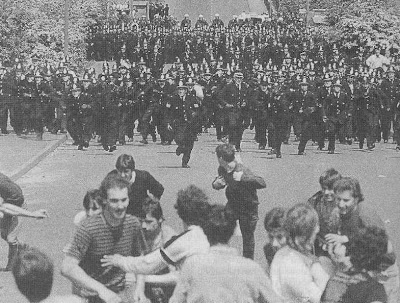 In the Daily Mail today, we see the spectre of a new "winter of discontent", or perhaps something worse. The newspaper is reporting that unions are joining forces for a series of co-ordinated strikes that will bring Britain to a juddering halt. By working together for maximum impact, they say the country would be crippled by strikes, civil disobedience and other forms of peaceful protest against government cuts.

At the leading edge, however, are two union giants – the Public and Commercial Services Union and Unison, with a combined membership of 1.7million. It is they that will this week sign a deal to co-ordinate the action.

But, while the public service unions may now have considerable power, it is unlikely that they can garner anything substantial in the way of public support. In fact, most people would see a strike by – say – civil servants in the tax department as an unalloyed good.

The union's target here, of course, is the government, and this could be seen as another "who governs Britain" contest, revisiting the Heath era, then stretching into the first Thatcher era and her epic battle with the miners. But Cameron is no Thatcher and, even if he was, his administration lacks legitimacy and popular support.

As to who governs Britain, it isn't Cameron and his merry men. We are ruled by an amalgam of Brussels, Whitehall, quangos and totally unaccountable local authority fiefdoms, all bolstered by endless, anonymous tranzie organisations such as Codex Alimentarius, most of which no one in the "strictly/corrie" belt has ever heard of.

When it actually comes to answering the question, "who governs Britain?", therefore, it is almost impossible to give a straight answer. But the worst of it is that most people care not at all. Even fewer people feel they owe any loyalty to the denizens of Westminster.

Rather than a great re-run of the Thatcher era, this takes on the perspective of two bald men fighting over a comb. The real pity is that they both can't lose. But even if the unions win, there is not the money to support their ambitions and the bloated public payroll, so they can only end up presiding over a bankrupt country.

Thus, for the ordinary Joe, this "titanic" battle is going to be an interesting one, only inasmuch as none of us have a dog in the fight. Who comes out on top is a matter of supreme indifference.