Snatch to be replaced

The BBC is trilling its little head off about the announcement that the decision to award the contract for the LPPV has gone to Force Protection Europe and Ricado, with their Ocelot. That is probably the right choice and it means that the last of the Snatch Land Rovers can now be replaced. However, while one can say it is exactly what the Army needed – that was back in 2003. It is now probably too little, too late.

Nevertheless. it will be heaps better than the Jackal and maybe some soldiers who would otherwise have left their legs and possibly their brains spattered over the Afghan countryside might survive intact. However, in the case of some officers, it would be hard to tell the difference if the latter event occurred, and for some generals it would be an improvement.

Of course, it would have been nice if we had had mine protected vehicles back in 2003, when we really did need them, instead of the Snatch Land Rover ... er ... except that we did (pic below). But the Army didn't want them and flogged them off at knock-down prices. It then did its level best to ensure that no more were bought - with the full support of the BBC - until the hapless Des Browne forced the issue and soldiers started finding out how nice it was to have two legs after all. 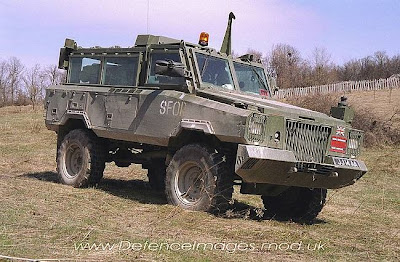 Now, of course, the Army has seen the light, seven years after it could have acted – which is about the sort of speed the Army is capable of working (in fact, slightly faster than average). But the Taliban now have seven years practice in blowing up British Army vehicles and will soon get the measure of this one. What we really need is more Buffaloes and some Huskies, which even the French are buying, and some concerted effort in using intelligence-based systems coupled with 24/7 UAV surveillance on target routes.

The trouble is that the idea of using detection systems, as well as detection vehicles in concert (much less designing and buying a Pookie replacement with GPR and environmental mapping software) is probably so far above the competence level of the typical brown job that we'll have to wait for the invasion of the Euro Army (where in some countries they still have an education system) to up the brain-cell count before we get any movement in that direction.

Instead, we'll have to make do with the Media's currently favourite talking head, Col Tootal, to tell us what for. He knows everything 'cos he's been there and ritten a book. So that's alright. Job sorted.