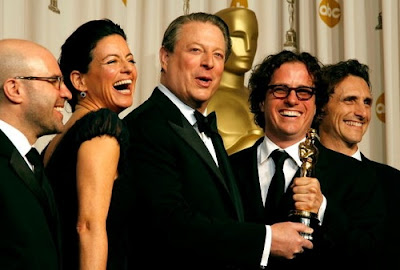 "At a gut level most left-wing environmentalists know that they're liars. Intellectually they might have somehow convinced themselves that Mother Earth is in some sort of man-made peril, but deep down inside where the truth won't be denied, these liars know they’re lying — know that the 'green movement' is all about a sinister political agenda to put them in the position of insect overlords in charge of we rubes who stubbornly refuse to let go of the idea that Marxism is a bad thing.

But Gore and Co. are consciously and purposefully using the most powerful propaganda device ever created to spread self-serving lies in the hopes of scaring us into voting for the kind of government that will give the elite more control over our lives."

My kind of writer here. The pic: all the "above the line" beautiful people ... lying through their damn teeth. And God help us, the stupid greenie proles believe them and lap it all up. Sadly, there is no cure for stupidity.