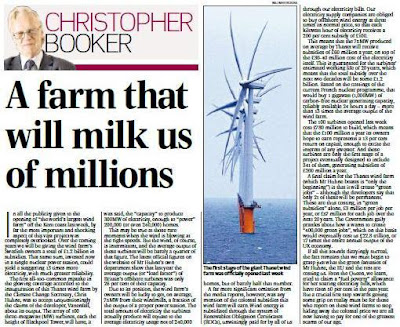 Booker, thank goodness, will get slightly more coverage with his column than I did with my post covering the same territory.

Certainly, it cannot be said often enough – especially as it is being ignored by the BBC and almost all of the media – that "the world's largest wind farm" opened off the Kent coast last week, is going to cost us £1.2 billion in subsidies over the 20-year working life of this installation. The corrected headline, by the way, reads "billions" and not "millions".

At a time, supposedly, of economic stringency, it is offensive beyond measure that this government – like its predecessor – is encouraging such huge amounts of money to be top-sliced from our electricity bills, "by far the most important and shocking aspect of this vast project" writes Booker.

But what is equally offensive is the silence of the media on this aspect. Those outlets which have reported on the installation have been completely silent on the fact that, for the subsidy we are being forced to pay, we could have a 1GW nuclear power station, which could yield a staggering 13 times more electricity, with much greater reliability.

The obscenity does not stop there, though. The Swedish owners, Vattenfall, may have commissioned 100 turbines but they are only the first stage of a project eventually designed to comprise 341 of them. When complete, this will generate subsidies of £1 billion every five years.

And even then, that is not the end of it. A final claim for the Thanet wind farm (which Mr Huhne boasts is "only the beginning") is that it will create "green jobs" – although the developers say that only 21 of these will be permanent.

Now, when you work it out, each of these are costing, in "green subsidies" alone, £3 million per job per year. That is £57 million for each job over the next 20 years. The Government gaily prattles about how it wants to create "400,000 green jobs", which on this basis would eventually cost us £22.8 trillion, or 17 times the entire annual output of the UK economy.

If all this sounds dizzyingly surreal, Booker says, the fact remains that we must begin to grasp just what the green fantasies of Mr Huhne, the EU and the rest are costing us. And we should also remember that Huhne's immediate predecessor was Ed Miliband, the man who is now the leader of the Labour Party, the man who approved this dreadful, deceitful scheme in the first place.

A crucial first step towards getting some grip on reality, Booker concludes, "must be for those who report on these wind farms to stop hiding away the colossal price we are all now having to pay for one of the greatest scams of our age." He is right. Even in this day and age, £1.2 billion is a serious amount of money, especially as that is only a down payment.