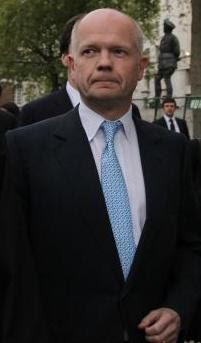 You would expect that, when the foreign secretary goes to New York to deliver a speech to one of America's most prestigious think tanks, that the British media might report it.

This is Hague, and he has been talking to the Council on Foreign Relations. But just as important is the subject – climate change. "I believe we, as foreign policy practitioners, need to up our game in building a credible and effective response to climate change," he says.

He then goes on to say that climate change is perhaps the twenty-first century's biggest foreign policy challenge along with such challenges as preventing the spread of nuclear weapons. So, we have a British foreign secretary equating climate change with nuclear policy, and this is not news?

But just to make the hat-trick, we have China trying to breathe life into the climate change process, and that does not seem to be worth reporting in the British media either.

So what really is important? Er ... don't ask. I really don't know any more what is supposed to be news. But generally, it ain't anything I'm interested in.