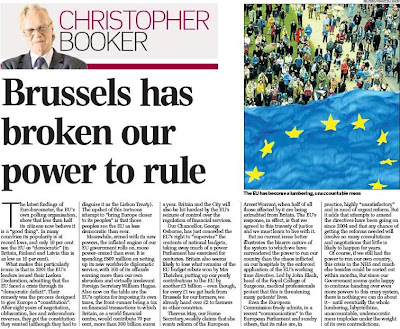 Booker has a go at the EU in his column, and very good it is indeed. It covers many of the areas we've looked at recently, plus a few extras, and the headline says it all: "Brussels has broken our power to rule."

The trouble is that Booker doesn't go far enough – but he cannot, as long as he is writing for a national newspaper. In another place, perhaps, he could have drawn the obvious conclusion from what he has to write. We need the most fundamental changes in the way we are governed. And, quite obviously, that goes way beyond changes in the faces of those who occupy the front benches in Westminster.

That revolution is not just against Brussels – that is only part of the problem and in many ways just a symptom of the bigger problem. There are many ways in which our government behaves, which are objectionable and which owe nothing to Brussels. We have needed a revolution for a long time – perhaps since before 1926, when the wrong type of revolution was on offer and we missed a major opportunity.

Now, it is possible to have a bloodless revolution, and it can be perfectly legal – especially as successful revolutionaries are able to re-write the rule book. ex post facto, to legalise their assumption of power. But the fact of the matter is that revolutionaries cannot play by the "white man's rules" and expect to win. We have to devise our own.

The most obvious need, though, it to stop pretending and call a spade a spade. True "eurosceptics" – i.e., those who want the UK to leave the EU and become a self-governing nation again – are by definition revolutionaries. And if that is what we are, then we need to behave accordingly, learning from successful revolutions and adopting their methods where they have proven to work.

But one of the most important things we must do is reinstate a sense of fear in our rulers. In any healthy society, a government fears its people. From that stems respect. That they treat us with such open contempt is good enough evidence that they have lost their fear.

The other thing we need to appreciate is that no revolution starts off as a mass movement – any more than did the revolution and the slow-motion coup d'état that brought us into the EU in the first place. Small numbers of people, dedicated to a clearly defined cause, working closely together, are far more effective than large, public groups in the early stages.

But, for all that, no revolutionary movement ever succeeds unless the wind of history is blowing in the right direction. For decades becalmed, many of us now feel the stirring of a breeze.

It blows from the very continent that has brought us so much grief in the past, and will do again. It is not strong enough yet even to scurry a fallen leaf, but there is most definitely a whisper. When sometime soon it reaches gale force, we need to be ready. At the moment, we are not ... but we do at least know what needs to be done.