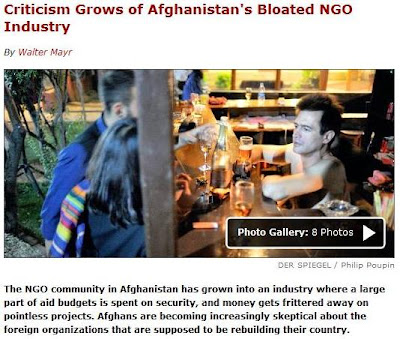 ... to see this report in Der Speigel. But what took it so long? I recall writing a whole series of posts in 2008 addressing such issues, and in one of the series, I quoted the award-winning journalist Fariba Nawa and her 2006 report on the reconstruction programme in Afghanistan. In it, she wrote:


Afghans are losing their faith in the development experts whose job is to reconstruct and rebuild their country. While the quality of life for most is modestly improved, they were promised much more. What the people see is a handful of foreign companies setting priorities for reconstruction that make the companies wealthy, yet are sometimes absurdly contrary to what is necessary.

Then, last year, we had the famous Ferris wheel which gave eloquent testimony to the bankruptcy of the programme.

Nearly $40 billion (€30 billion) in development aid has flowed into Afghanistan since the start of the war. It goes into an industry which is also concerned with securing its own posts and functions, with the hard-to-criticize justification that it is doing good.

Yet there is no one with any understanding of the situation in Afghanistan who will tell you that the NGOs are anything other than pure poison, along with most of the government aid programmes. They are doing more harm than good - incalculable harm - and will continue to do so for as long as we support them.

"Aid organizations are businesses dressed up like Mother Teresa," writes the Dutch journalist Linda Polman in her no-holds-barred exposé "The Crisis Caravan: What's Wrong with Humanitarian Aid?" And this is not new information – as we ourselves show. But still it goes on, and on and on.

That is the curse of modern society (and perhaps even of society in general). Long after you know something is a crock of sh*t, it still goes on because there seems to be no way of stopping it. But why are we so surprised that Afghanistan is going belly up? We would be mad to expect any other outcome ... stark, staring, raving mad.

There you have it - a kind of incurable madness grips us all. We allow this insanity in our name. We listen to the politicians justify it, and do not slaughter them, even despite the fact that their ignorance and sloth will cause the slaughter of many, all with our money.

The international community is digging a multibillion-dollar grave for itself - and us. This is decadence of a higher form, and we should be ashamed.