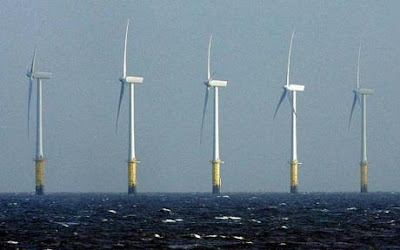 Via the blogs, we learn that feed-in tariffs are a total rip-off. But how can that message possibly prevail when the BBC's "take" is that buying in to the scam offers "a great return on investment!" And, needless to say, the Beeb is also talking up the news that the world's biggest offshore wind farm off the Kent coast has been officially opened.

As always, the BBC sprays out figures, but no information. We get told that there are 100 turbines in the £780m wind farm, and that these "are expected to generate enough electricity to power 240,000 homes" – perhaps the most dishonest way going of describing the capacity of these machines.

In fact, getting proper statistics from the media is a losing battle, but Vattenfall, the project owner, has it on its website that there are 100 Vestas V90 wind turbines, with a total capacity of 300 MW. This is sufficient, it says, to supply more than 200,000 homes per year with clean energy.

By the time you take in the load factors (about 26 percent), however, and apply the rather understated government-inspired domestic consumption factor, you actually get 131,000 homes – but even then the figure is fiction. On cold, windless days, the number is zero. On a breezy summer night, when the power isn't needed anyway and the National Grid is having to pay suppliers not to produce electricity, it could be a lot more. Such are the games they play.

But there are no games when it comes to the subsidies. On top of the £40 million in electricity sales, Vattenfall will collect at least £60 million a year in Renewable Obligation Certificates (ROCs) top-sliced from our electricity bills so that we do not notice the theft. And theft it is, an undisclosed tax paid to these rip-off merchants for producing unsustainable electricity.

Over term for the 20 years these turbines are suppose to last, we are looking at a public subsidy of £1.2 billion – enough to build a 1GW nuclear power station – a plant with a deliverable capacity more than 13 times this wind array. That is the extent of the rip-off to which we are being subjected.

And for that, it appears, we get 21 full-time green jobs. But if we gave them a million each and told them to get lost, that is not even a rounding error on the amount we are dealing with. We would get to "save" (i.e., not spend) £1.2 billion, less £0.021 billion. Instead, we pay - effectively - nearly £60m per job for the 20 years. These must be the most expensive jobs on the planet - we could even have 20 David Camerons for the price of each worker.

As with my previous thread, I ask why we tolerate this. That much, of course, is rhetoric. We tolerate it because, individually, we are powerless against the might of the state. But that will not always be the case. We need to make it so before the state ruins us.