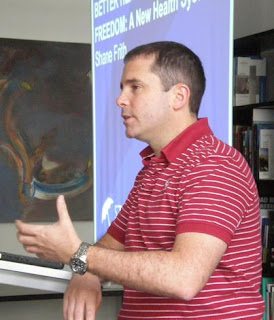 On Thursday 30 September at 6pm, I am told, New Direction – The Foundation for European Reform will be launched in the City of London. The launch will attended by Baroness Thatcher as well as the secretary of state for defence, Rt Hon Liam Fox MP; Europe minister David Lidington MP, and minister for international security strategy, Gerald Howarth MP.

New Direction, they claim, is a free market, euro-realist think tank. It is affiliated to the Alliance of European Conservatives and Reformists (AECR). The founding president is Geoffrey Van Orden MEP and the director is Shane Frith – formerly director of Progressive Vision.

In fact, little Shane is a tad shop-worn. He has worked for a number of London based think tanks, including Reform, Open Europe and the Centre for Policy Studies, since moving from his native New Zealand. He has spoken for the Stockholm Network and was the founder and director of Doctors' Alliance, "a pan-European network of medical professionals seeking better ways to deliver healthcare." He is also listed as a Progressive Conservative.

Shane tells us he has regularly appeared on television and radio in New Zealand, Australia and the UK, including the BBC Politics Show, Bloomberg TV and BBC Radio. And, from 2002 until 2004, he was Chairman of the International Young Democrat Union, an organisation "that links young people involved in centre-right politics."

Not only that, he has been a parliamentary candidate for the New Zealand National Party and has worked as a consultant for a number of MPs both in Britain and New Zealand. More recently, as "a card-carrying member of the Conservative Party," he confessed that he was "worried that I may have to vote for the Liberal Democrats at the next election."

Howsoever, this week's launch will be attended by MPs, MEPs, Ambassadors and senior representatives from the City and business. Then, New Direction will get down to the serious task of providing an income for think-tank-tart Shane Frith.

In his spare time he will then seek to promote policies and values that emphasise the factors of growth and competitiveness - small government, less regulation, free trade - as well as opposition to EU federalism and the importance of the transatlantic alliance and a range of issues including defence and immigration.

No doubt, the cause of eurorealism will be mightily strengthened.