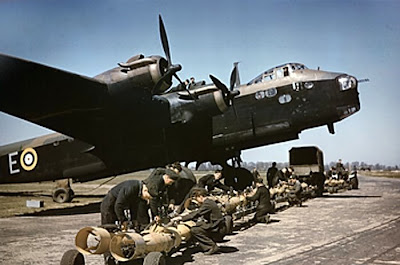 Day 63 is now posted - in part. I'm playing my usual trick of starting with a short post, to which I will add over the period, so that it will end up looking very different from what it does today.

I've made a small, but significant change to day 58 (5th September) where I find that not only did Churchill not mention Hitler's threat to raze British cities, neither did The Times. Yet that very issue was sufficiently newsworthy for the New York Times to have used it for its front-page headline.

You have to admit that it is a little odd that, when the German dictator makes such an overt and very public threat, the prime minister of the UK doesn't even mention it in a Commons speech and the newspaper of record does not refer to it in its own news story which covers Hitler's speech. I must now find how other newspapers treated the story. (If anyone has copies of any national newspapers for 5 September 1940, I would certainly like to know about it).

Howsoever, with the current piece, that now makes 63 daily posts on a single subject, without a break – that has to be a personal record! And, to maintain a sense of immediacy, I do not write the day's piece until the day actually arrives. With another 51 days yet to go, it is going to be interesting to see whether I can last the course (without cheating).

Living with the Battle of Britain day-on-day, though, it is inevitable that it should dominate my thoughts and find plenty of references in my other posts, and it is also inevitable that one should hanker after the rather direct and beguilingly simple solutions to some problems - you simply loaded up some bombers and sent them on a delivery errand.

Certainly, that would be an extremely attractive solution to this sort of idiocy, where we have Lord Adair Turner, Chairman of the Committee on Climate Change (CCC), in full spate again.

He is saying that the UK is likely to miss the target unless there is massive investment in wind, wave and solar. And he has also written a "strongly-worded" letter to another idiot, Chris Huhne, the energy and climate change minister. Needless to say, he is calling for the government to "ramp up" efforts to build turbines both on land and at sea.

Just one aircraft, one teensy-weensy bomb, suitably and accurately targeted, and we could be rid of both idiots in one fell swoop. All we have to do is wait for them to meet.

But such are the complexities of the modern world that we can no longer do such things – unless of course, your targets are "ragheads" in a foreign land and you proclaim yourself to be saving the free world from al Qaeda. Then, it seems, you can slaughter a considerable number of people a lot more innocent than Turner and Huhne, and walk away without a stain of your character.

No longer simple solutions though – we will have to look for a different but equally permanent answer.