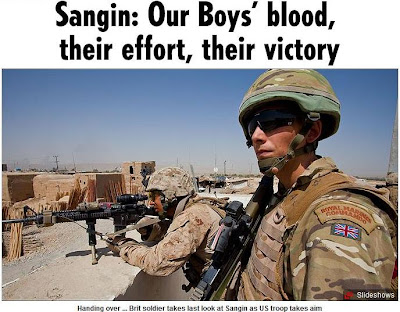 In the aftermath of the British withdrawal from Sangin, we have considerable media comment, and a huge contrast of styles. Up front is the ponderous – some might say pompous - Max Hastings, in The Daily Mail. He says: "Blame the generals and politicians for this mess. But our soldiers can hold their heads up high."

Then we have the gung-ho Sun which blares: "Sangin: Our Boy's blood, their efforts, their victory." And just to make sure we get the message, it has that great strategist Andy McNab, who is now the "Sun Security Adviser". Continuing the joke, he tells us:


I AM fed up with armchair generals who say the handover of Sangin to US Forces is a British retreat. That is 100 per cent crap. We have moved out because at long last the 20,000 US 'boots on the ground' finally arrived.

The Scotsman has Clive Fairweather telling us that the handover is a sensible redeployment of our troops ... not a retreat. He then retreats behind a "premium" paywall, so we never get to see what he really thinks. And we care less.

In The Daily Telegraph we get some sensible pieces from Thomas Harding, but it is more reportage than analysis. And that is what is missing – decent analysis.

You couldn't call Hastings's piece "decent" analysis. His is lightweight extruded verbal material. You unroll it, tear it off by the yard and paste it in to fill the space. I'm getting rather bored with his pontificating. I much prefer my own.

I was mightily cheered, however, by an extract from Michael Foot's biography of Aneurin Bevan, who commented on the wartime coverage of military affairs – the Second World War, that is. "Immediately on the outbreak of war," he wrote, "England was given over to the mental level of the Boys' Own Paper and the Magnet." He continues:


The Childrens Hour has been extended to cover the whole of British broadcasting, and the editors of the national dailies use treacle instead of ink. If one can speak of a general mind in Britain at all just now, it is sodden and limp with the ceaseless drip of adolescent propaganda.

At least we can take some comfort in having been there before. I devoted a considerable amount of effort to evaluating the situation at Sangin in Defence of the Realm and was particularly proud of this and this, both of which pieces attempt to get to the core of the problem.

But with a nation given over to a second childhood, still "sodden and limp with the ceaseless drip of adolescent propaganda," such grown-up analysis is a complete waste of time and energy.

How much easier it was for the political classes to prattle on about "underfunding" and "overstretch" instead of using their brains. How much easier it is now for the tabloids to cheer "Our Boys" to the rafters, and celebrate yet another victory. We deserve what we get.