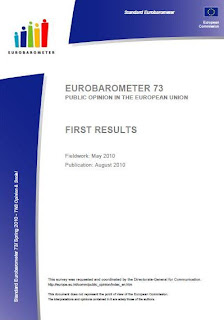 The Daily Mail is reporting that Britain's £5billion rebate from Brussels is "under threat".

The EU's budget chief Janusz Lewandowski has warned that the justification for the annual payment has "clearly sunk" and is suggesting that it should be scrapped as it has "lost its original legitimacy".

Inevitably, the comments have provoked "an angry response" in Britain, where critics say that "the UK's £8.3billion a year net contribution to the EU is already far too high."

England Expects, however, smells a rat. He thinks this is a set-up, with the issue being raised only for the EU commission to back off when The Boy makes a ritual protest, enabling him to look good in the eyes of his beleaguered and increasingly cynical population.

The price – and of course there will be a price – will be early acquiescence to the various financial supervision directives, which the Tories will undoubtedly slide through with minimal discussion, knowing the complexity will dissuade the media from taking too close a look.

However, the "gaming" will be of very little interest to most people. As we see from a recent Eurobarometer report, EU popularity ratings are hitting a nine-year low.

But one of the beauties is the finding illustrated below, of "trust" in the EU. The UK scores a decisive last, with only 20 percent of the population moronic enough to believe this institution is anything other than Satan's spawn. 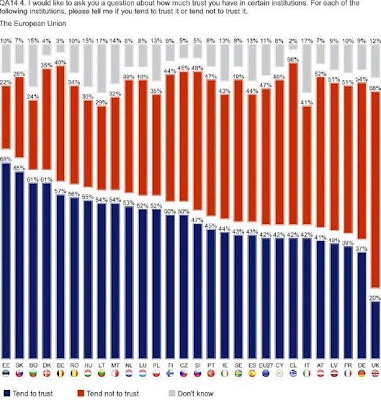 Actually, for all the posturing of the Europhiles – and the darlings do still exist – their problem is the apathy card. Most people don't give the EU a second thought. It has no relevance to them and, for the most part – when it does intrude - they just wish it would go away.

That is probably the hardest sentiment for the euroweenies to deal with, as it is very difficult to get someone excited about something in which they have absolutely no interest. We see in the EU death not so much by a thousand cuts as death by boredom.

But, with the EU playing games on the budget, the down side (for it) is that people will be reminded that we still pay an awful lot of money to it, for very little. And while the budget payments have never really gained serious political traction in the UK, as the Tory "cuts" begin to bite, we can see more and more people asking why we should be stuffing the mouths of the euroweenies with gold.  Then apathy might turn into something else.