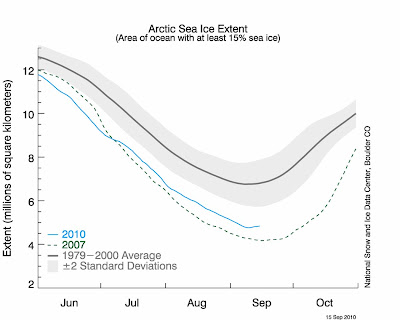 According to the National Snow and Ice Data Center, arctic sea ice appears to have reached its annual minimum extent on 10 September.  The minimum ice extent was the third-lowest in the satellite record, after 2007 and 2008, the Center says, "and continues the trend of decreasing summer sea ice."

The big joke, of course, if you are into these things, is that arctic ice extent seems to run on a seventy year cycle, as well as being affected by short-term cycles which have more to do with wind patterns than they do temperature. Thus, a declining trend since the beginning of satellite data – which started in 1979 – is actually meaningless. Unless you know what happened in the previous cycle, you have no comparative base, and therefore you are just producing figures in isolation. 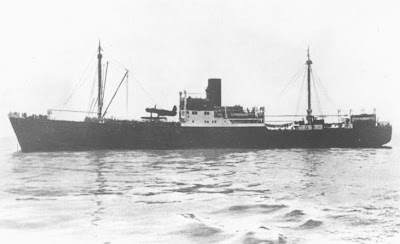 The very latest figure might tell us that the cycle is on the turn, and there is some slight evidence that we have passed the bottom end. We are, after all, just past the 70th anniversary of the surface raider Komet traversing the ice-bound northeast passage, on her way to the Pacific to sink Allied shipping.

As we recalled earlier, she left Germany on 3 July 1940 with a crew of 270, sailed up the Norwegian coast and then, with the assistance of the Soviets, navigated the northern route, crossing the Bering Straits into the Pacific Ocean in early September. She returned safely to Germany on 30 November 1941, after sinking seven ships, only in 1942 to be sunk by British motor torpedo boats near the Cap de la Hague, with no survivors.

The Russians though, who live with the ice - and suffer from the vagaries of the climate far more than we ever have - have collected a huge amount of data and are convinced (warning mega PDF) that there are long-period fluctuations in climatic conditions, and have evidence to demonstrate the existence of an approximately 60-year repeating pattern in the circumpolar Arctic zone.

Needless to say though, that doesn't stop the little boys and girls in NSIDC knowing better and making stupid statements. Why should they listen to the people who know what they are talking about when they can make complete idiots of themselves unaided? But I guess they are no more stupid than the people who listen to them.