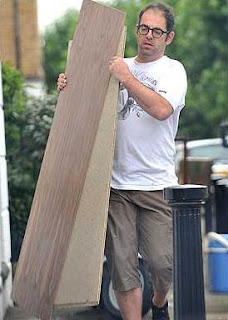 Thirty-nine year-old Gian-Paul De Vito-Tracey (pictured), who has held a senior position at the Department for Work and Pensions, is seeking £300,000 damages from the government after falling off a newly issued swivel chair in 2008 and hitting his head on a wall.

This is almost twice as much as a soldier was given after suffering severe burns in a Taliban ambush in Afghanistan, but Mr De Vito-Tracey is to claim he is left 80 percent disabled for life.

The injury, we are told, caused "downgrading of general intellectual functioning". Strangely, The Sun is less than impressed, showing the man holding two short planks (is this a veiled comment?).

Mr De Vito-Tracey has experienced "slowed speed of information processing, impaired executive function, severe verbal communication difficulty and mild to moderate word-finding difficulties". It will be asserted in his formal claim that all this has "left him at a severe disadvantage in the job market", hence the level of the compensation demanded.

This is very hard to take seriously. The features described would seem to make Mr De Vito-Tracey admirably qualified to be a senior civil servant, quango chief or politician. In fact, Mr De Vito-Tracey's misfortune is that some of his incapacity is only "moderate". Were it more severe, he could be qualified for the role of environmental correspondent for a media organisation, or even to write an environment column for The Guardian.

We could, of course, offer to improve his employment prospects. Our charges are very reasonable.