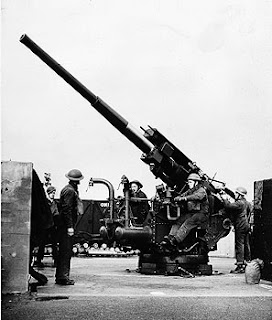 Offline for most of the day, working up different aspects of the Days of Glory site, yesterday I was building the narrative on the Battle of Britain. I might as well get the bulk of the work done as we run into the "silly season".

In addition to the Day 28 narrative, therefore, I've made a start on another of my "backgrounders", this one on anti-aircraft guns.

Something I had never realised before is that, for three of the four months of the Battle of Britain, the guns claimed 221 confirmed kills. And they point to other functions which put the gunners at the heart of the battle (see p. 23 on the pdf linked).

The Command claims that its activities broke up bomber squadrons to enable them to be more easily dealt with by fighters. Furthermore, the importance of AA shell bursts as a "pointer" to fighters, even though the guns cannot themselves effectively engage the enemy, was frequently demonstrated.

Before this could have been known, Churchill created the narrative of "the few".  With the battle less than halfway through, on 16 August 1940 he had visited 11 Group's operations room at RAF Uxbridge, to watch Fighter Command in action. Afterwards, he told Maj Gen Ismay, who had accompanied him: "Don't speak to me, I have never been so moved."

After several minutes of silence he then said: "Never in the field of human conflict has so much been owed by so many to so few." This was the master word-smith at work, for that sentence formed the basis of his speech to the House of Commons on 20 August.

It is rhetoric at its finest, and it captures the imagination of the nation. But it is also terribly misplaced - representing only a partial picture of a battle that was still being fought.  It ignores, for instance, the fact that - at its height - Anti-Aircraft Command employed over 350,000 personnel. Through the Battle of Britain, when it was expanding rapidly, there must have been at least 200,000 manning the guns and searchlights.

Whatever else, 200,000 personnel can hardly be described as "the few" – yet they are as much part of the battle as fighter pilots. Without their intervention, total Luftwaffe losses over the period would have been more than a hundred less than the RAF, instead of that much higher (1733 to 1603).  Numerically, at least, we would have lost the Battle of Britain.

Interestingly, immediately after his reference to "the few", Churchill goes on to devote a far greater portion of his speech to Bomber Command. In an excerpt that is rarely quoted, he says:

... we must never forget that all the time, night after night, month after month, our bomber squadrons travel far into Germany, find their targets in the darkness by the highest navigational skill, aims their attacks, often under the heaviest fire, often at serious loss, with deliberate, careful precision, and inflict shattering blows upon the whole of the technical and war-making structure of the Nazi power.

On no part of the Royal Air Force does the weight of the war fall more heavily than on the daylight bombers, who will play an invaluable part in the case of an invasion and whose unflinching zeal it has been necessary in the meantime on numerous occasions to restrain.

I have no hesitation in saying that the process of bombing the military industries and communications of Germany and the air bases and storage depots from which we are attacked, which will continue on an ever-increasing scale until the end of the war and may in another year attain dimensions hitherto undreamed of, assure one at least of the most certain, if not the shortest, of all the roads to victory.

In the historical context, this is not a man who has his back against the wall, fighting for survival against overwhelming odds. Already, he is thinking offensively, looking for the path to victory – and his war-winning weapon is not the fighter but the bomber. "On no part of the Royal Air Force does the weight of the war fall more heavily than on the daylight bombers," he says.

More interestingly, we are at this time losing the war, but not in the air. The danger is through what one analyst calls the "slow strangulation of the British economy", caused by the combined Luftwaffe and U-boat attack on shipping.  Even in 1940 this is far more serious than is realised.

Heavily censored at the time, there had been an acute "coal crisis" in the January and February of 1940 and stresses created, far from being resolved, were intensifying. The inland transport system was not coping and only the most extreme measures eventually got the crisis under control and system working effectively on a war footing.

In the two years that it took to devise a workable system, small colliers and their escorts – many of them armed trawlers – were forced to traverse the dangerous waters of the East Coast and the Channel, facing appalling dangers - and suffering far greater casualties than "the few" who take all the glory and have captured the nation's imagination.

The heroism of the crews of the small ships gave the breathing space for a resolution of the transport problem which, incidentally, was a triumph for central planning. Private enterprise had singularly failed to step up to the plate. That undoubtedly influenced post-war politicians and administrators who had seen the failures at first hand, failures which cast a long shadow which reaches out even to the present.

However perilous the situation for Fighter Command might have been, the outcome of the Battle of Britain was never seriously in doubt. The Germans' objective – the invasion of Britain – was one which could never have succeeded. Apart from anything else, they simply did not have the physical resources to transport and sustain an invasion force.  We, on the other hand, at the height of the battle, still had sufficient resource to send a squadron of Hurricanes to Malta.

What could have lost us the war was that "economic strangulation", which was resolved not so much by force of arms – which was a necessary but not sufficient condition for victory – but by central planning on a heroic scale. Yet the myth endures that the nation was saved by the heroic actions of a few brave young men, "the few" to whom even their "creator", Churchill, devoted the smaller part of his rhetoric.

There can hardly be a better example of how the prevailing narrative can so completely misrepresent the reality and project such a false picture that the understanding of our past is little more than fantasy. Whether that makes a difference to how we manage our affairs is a moot point, but I rather suspect it does.

Battle of Britain thread
Posted by Richard at 00:42